How Would We Know? 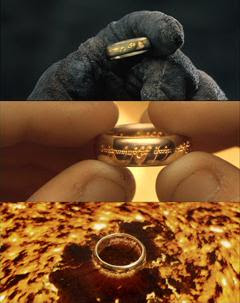 A question to any and all Catholic bloggers who are concerned with the two-front war with in which the West is presently engaged; namely, with paganism in its two forms, postmodern nihilism and Islam:

How would we know when to cheer, what would signal victory?

A great many voices are pointing toward, shouting about, and packaging warnings, solutions, and strategies. But what would be the extent of a victory with which we would all agree would be satisfactory?

You see, it seems to me that if we don't have a goal toward which to aim, we will never know when we have arrived.

James Pinkerton's ”Shire Strategy” is just that, a strategy and perhaps a goal, but not flat-out victory. It is a means toward containment of one of West's foes, Islam.

But when, using further imagery from Tolkien's Lord of the Rings, when would we, as Catholics mind you, cheer and laugh at heart's-ease with Gandalf, Strider, and everyone left standing in Gondor? And, I suppose, a concomitant question is, what would we not agree to use in the efforts toward such goal; namely, the ring of power? What is that Isildur's Bane that if we use, we shall not, by definition, have won a victory?
Posted by Athos at 3:39 PM

The question you raise here is so important that I've been reluctant to respond until my thinking on it is a bit clearer. I'm still not there, but I wanted to say something provisionally. It may well be that we cannot identify a goal or define a victory that stands apart from the responsibility of each of us to be faithful stewards. Our friend Gil Bailie once said, “Western culture’s historical confidence and cultural resourcefulness is deeply indebted to Christianity’s eschatological hope, the glow of Easter on the horizon of history.” Well, the light is dying now, and we stand on the threshold of a great darkness. It is impossible for us to know what may lie in the midst of that darkness, much less what awaits humanity on the other side, but ultimately that not our business. To win victories in the darkness we would have to enter the darkness, where no victory is possible. As Christians, our eyes are fixed upon that glow on the horizon; its light is carried in our hearts and spread through lives of faithful service. What goals we may attain and what victories we may wrest will be defined only by the presence of that light in each of our lives and, therefore, in an otherwise benighted world.

For the record, Mark Shea posted:

Interesting thought puzzle for those attempting to think Christianly about how we should conduct ourselves in the world. I'm not sure of the positive side of the question. As to Isildur's Bane, I think the answer is obvious: the temptation to commit intrinsically immoral acts in order to get what we want or protect us from the evil we fear appears to be the great temptation of our culture.

We can achieve victory only by passing through the fire of self-sacrifice. What that fire will look like, I cannot say. Perhaps it will be the aftermath of an ill-starred attack upon Iran. Perhaps it will me a nuclear attack. Perhaps it will will be a total financial and economic collapse brought on by our current drive for empire.

Only by accepting the Cross when it is offered to us can we pass through defeat unto victory. Only by sacrificing ourselves can we save what is dear to us. All other paths lead to Nemesis.