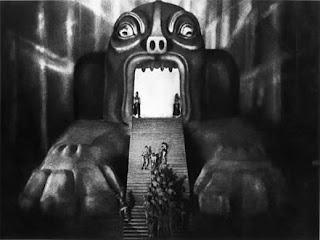 Gil Bailie reminds us of a disturbing truth regarding popular themes in so-called "liberation" causes and special interest groups today:

(P)eople are tempted to multiply the innocent victim, to kill all the enemies of the nation or the class, to stamp out what remains of religion or family as the origins of all forms of repression, or to sing the praises of murder or madness as the only true forces of liberation.

All projects of liberation in our world that start from the presumption that we cannot question desire, that desire is the ticket to our libertion, end up by offering us victims and an ideology that justifies that victimization.
- Gil Bailie, Gift of Self

In other words, if one begins in the realm of what Saint Paul calls epithumeia in his letter to the Galatians and accepts desire as a perfectly valid raison d'être for human behavior, one will inevitably end at the place of sacrifice - human sacrifice (Gr. thumos) - as St Paul predicts. Desire here is used not merely in a Freudian sense, but rather from the lexicon of cultural anthropology. It is "compulsive fascination with the other, either positive or negative," which leads to rivalry, resentment, obsession, and, finally, murder.

What is stunning about Bailie's insight is that so many litigious groups today seek "liberation" - freedom - for the free exercise of desire never realizing or having any concern for the victims strewn in the wake of their endeavors, including the smallest and least heard victims, children aborted from their mothers' wombs.

For what rationale? For the freedom to follow unquestioningly one's desire.

The Catholic Church still maintains with Saint Paul that freedom comes in stepping away from the old ways of the primitive sacred and its enshrining of desire in pantheons of gods and goddesses or - in one case today - a Scimitaresque bloodthirsty monotheism.

This is the true war in which humanity is engulfed today.
Posted by Athos at 6:46 AM

With this bond of slavery,
"...freedom to follow unquestioningly one's desire" is a blindness to "any concern for the victims strewn in the wake of their endeavors, including the smallest and least heard victims, children aborted from their mothers' wombs." They exists only in their 'desire' with closed eyes, ears and hearts. This amazing blindness has swallowed up numerous branches of deviated Christianity to where many of our Christian sisters and brothers are treading a fine line of falling into that swirling vortex spinning toward a recapitulation of the cultural founding murder and "the old ways of the primitive sacred and its enshrining of desire in pantheons of gods and goddesses or - in one case today - a Scimitaresque bloodthirsty monotheism." (This was so well described in The Dionysus Mandate: A Fable of Desire and Death, except the Scimitaresque part.)

Is there a wake up call? What time is it set to go off? Who will actually want hear it? Is not the wake up call a part of the Church's mission (and therefore, our "calling" as members of the Body of Christ)?

890
"The mission of the Magisterium is linked to the definitive nature of the covenant established by God with his people in Christ. It is this Magisterium's task to preserve God's people from deviations and defections and to guarantee them the objective possibility of professing the true faith without error. Thus, the pastoral duty of the Magisterium is aimed at seeing to it that the People of God abides in the truth that liberates. To fulfill this service, Christ endowed the Church's shepherds with the charism of infallibility in matters of faith and morals."

And as members of the Body of Christ we are called into discipleship of Jesus though "Holy Orders and Matrimony as the sacraments of vocation, a word that comes from the Latin for “call.” We are all called by God. In fact, we are called at many levels, and progressively throughout our lives. We are called into life, into human dignity and responsibility, and into certain relationships, communities and tasks. Most importantly of all, we are called into an intimate communion with God that does not come naturally but must be sought and cultivated within the grace, or special outreach, of God.

"This understanding that we are called to live and act beyond what is natural to creatures is a basic assumption of all our sacramental activity and of our sacramental theology. Therefore “vocation” is a key theme of Christian life, and a key component of the way we think about sacraments."

So, as we are "called out" to be church, as the Body of Christ, we can overcome the slavery of the false desire of individualism that inevitably leads to many victims. However, when we succumb to the myth of "freedom to follow unquestioningly one's desire" we actually fall prey to and become a part of the mob and violence.

Listen to tracks 17-18 of Bailie's most recent ERI CD, Easter in the Meantime. "Heterosexism" and what he quotes (then) Jos. Ratzinger - ... a rage directed against reality itself... - "the mutual intensification of the 'yes' and the 'no'" of von Balthasar as well.

Isn't there some place the notion of a "remnant" (CCC 710, 711) and has that idea of remnant been brought out by Girard? I don't recall it. What is your take on a "remnant" of people, that being the Body of Christ?