It is amusing, and a bit sad, the way denizens of the hall of mirrors stoke the flames of the funeral pyre for one of their lions, and feel hurt because the Holy Father hasn't matched their laudatory eulogies.

It speaks reams about the non-Catholic (and cafeteria Catholic) mentality. They simply don't grasp that the Church thinks past individual politicians and the mainstream media's take on them. The Church ponders long and lengthy about the events of millennia ago as though they are part of recent history, and honors the players in the "theo-drama" of salvation history with a voice today as though their votes still count (they do).

Chesterton's "democracy of the dead," however, is reserved for those who strove on Earth to live in accordance with the teachings of the Catholic Church and her magisterium. This is precisely what pop culture, bipartisan politicians, and denizens of the mimetic swirl want no part of.

Pity. Senator Kennedy may have wanted to get to heaven, and he may. But he was no saintly wannabe by the standards set by the Church. He only qualifies as a saint by the standards established by the secular humanist left. He was their kind of saint.

He had his 47-year tenure on that stage and is honored for it. But in eyes of the Church, it was but a wisp of time. For the Holy Father, Emperor Manuel II Palaiologos looms much larger, and more eloquently for the needs of our time, than the senator who had a perfect score from NARAL.
Posted by Athos at 4:13 PM 1 comment:

Amid the snowstorm of eulogies for the latest Kennedy to die, Father Raymond J. de Souza's article A tale of two Kennedys, published in July, reminds us of the two very different paths taken by Eunice Shriver and Ted Kennedy. Prayers for both of them.
Posted by Athos at 4:17 AM No comments:

Z Street, reports my favorite Cassandra, stands with the run-away teenager, Rifqa Bary and the Christian faith, I must add, against the MSM dim-bulbs who plug their ears and sing LA-LA-LA whenever reality checks about the Scimitar break the surface in pop culture here.

This is important, because our Jewish brothers and sisters see the chasm between the biblical Spirit that works against the primitive sacred and the looming resurgence of "papan hearts and pagan ears" which seeks to cross the chasm and destroy the model/rival.

The "chasm" of which I speak may be seen between this and this. 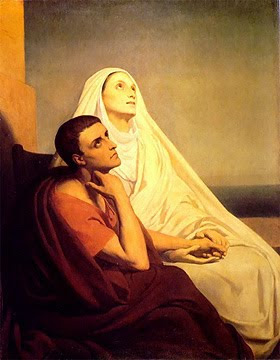 Under the heading of "Even a blind hog finds an acorn now and then," the NYT reports Some Roman Catholic Bishops Assail Health Plan, featuring a link to Archbishop Charles Chaput's weekly column:

No system that allows or helps fund—no matter how subtly or indirectly—the killing of unborn children, or discrimination against the elderly and persons with special needs, can bill itself as “common ground.” Doing so is a lie. 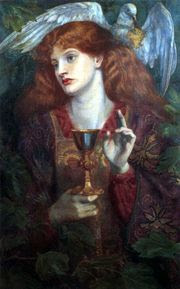 For one for whom the topic of Marian chivalry and knightly charity is not a closed book (switched off Kindle?) or moot topic, I found this fascinating.
Posted by Athos at 1:47 AM No comments:

As the Catholic community is reeling from the news of the child abuse reports in Irish Catholic schools, Rocco Palmo brings us Hope Amid the Ashes.
Posted by Athos at 1:40 AM No comments: 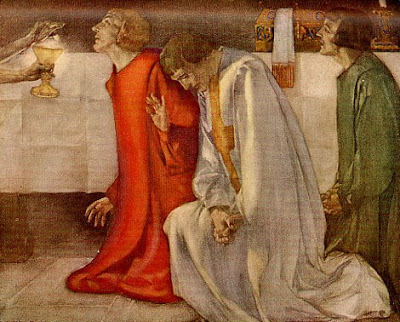 "The only cure for sagging of fainting faith is Communion. Though always Itself, perfect and complete and inviolate, the Blessed Sacrament does not operate completely and once for all in any of us. Like the act of Faith it must be continuous and grow by exercise. Frequency is of the highest effect. Seven times a week is more nourishing than seven times at intervals. Also I can recommend this as an exercise (alas! only too easy to find opportunity for): make your communion in circumstances that affront your taste. Choose a snuffling or gabbling priest or a proud and vulgar friar; and a church full of the usual bourgeois crowd, ill-behaved children - from those who yell to those products of Catholic schools who the moment the tabernacle is opened sit back and yawn - open necked and dirty youths, women in trousers and often with hair both unkempt and uncovered. Go to communion with them (and pray for them). It will be just the same (or better than that) as a mass said beautifully by a visibly holy man, and shared by a few devout and decorous people. (It could not be worse than the mess of the feeding of the Five Thousand - after which [our] Lord propounded the feeding that was to come.)

"Out of the darkness of my life, so much frustrated, I put before you the one great thing to love on earth: the Blessed Sacrament... There you will find romance, glory, honour, fidelity, and the true way of all your loves on earth, and more than that: Death: by the divine paradox, that which ends life, and demands the surrender of all, and yet by the taste (or foretaste) of which alone can what you seek in your earthly relationships (love, faithfulness, joy) be maintained, or take on that complexion of reality, of eternal endurance, which every man's heart desires." 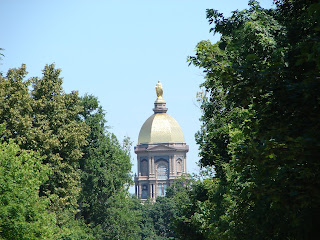 …till the rotund off-spring producing member of the species warbles.
Posted by Athos at 2:48 AM No comments:

For the record: Catholics Against Obamacare. [ht: Curt Jester]
Posted by Athos at 2:50 AM No comments:

Not Just Meek and Mild 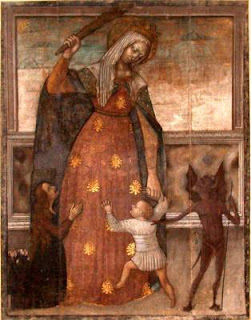 Having read this in MAGNIFICAT this month, and again at Shrine of the Holy Whapping, it must needs be printed here at Chronicles. Behold, Our Lady the Grand Adventuress, smasher of insults and finder of hidden treasures.

Villancico VI for the Feast of the Assumption, 1676 (excerpt)

Clear the way for the entrance
of the bold adventuress
who undoes injustice,
who smashes insults.

The sun's rays are her
resplendent armor
the stars her helmet,
the moon her boots.

On her shining shield
with which she dazzles hell,
a mountain is emblazoned
and golden letters: Tota Pulchra.

Celebrated for her beauty,
feared for her ferocity
she is jaunty and valiant,
and angelic is her beauty...

She dispelled the charms
of the ancient serpent
whose conspiracy
sets us under slavery's yoke.

She avenges wrongs
and annuls unjust laws,
gives refuge to orphans
and shelter to widows.

She liberated prisoners
from that prison where,
were it not for her daring spirit,
still they'd await their release.

All hell trembles at the mere
mention of her name.
And they say its very kings
fast on her vigil...

She is the one, whose tread
no demon can endure.
When he sees her feet,
he takes to his heels.

Crowned with glory and honor,
the deeds that brought her fame,
since they cannot be contained on earth,
send her riding out of this world.

As knight errant of the spheres
on a new adventure,
she finds hidden treasure
sought by so many. 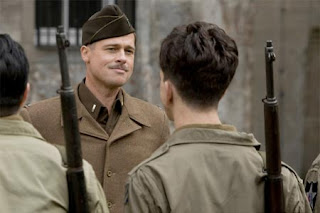 Here's the deal. I used to enjoy going to the movies. This was when violence and killing was not a form of entertainment for box-office junkies. That is to say, when the Christian faith in general (vague, euphemistic, focus-group driven) and Catholic truth in particular (it is, you know) still informed and influenced popular culture.

Now, however, poor blighters pour out millions of dollars - what an industry! - to spend over two hours watching the likes of Brad Pitt (pictured above mugging and earning millions of dollars) do what passes for acting. But his influence far out-passes that of Our Lord in the sad, neo-pagan West.

I do not worship the "right" to bear arms or to use them on fellow human beings (or baseball bats, for that matter).

Oh, yes. And I didn't see "Inglourious Basterds." I've seen more than enough Tarantino for one life (sitting through the trailer was all I needed). Did you? Pity.
Posted by Athos at 6:31 PM 2 comments:

Don't listen to those who misrepresent the facts about health care reform.
Posted by Athos at 2:36 AM 1 comment: