In the Mimetic Maelstrom of Sin 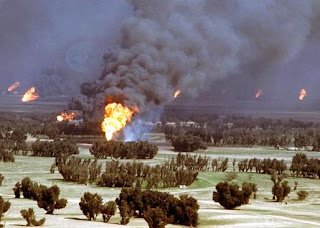 NEAR THE END, there in his bunker beneath the garden of the old Reich Chancellery building at Wilhelmstraße 77, Adolph Hitler ordered his minister of armaments, Albert Speer, to carry out a nationwide scorched earth policy, in what became known as the Nero Order. Hitler felt that the German people had shown themselves to be weak, and undeserving of a leader such as himself. Having failed their test of character, they should be condemned to destruction.
Happily for the German populace, Speer defied the Führer's order.
I like many others lived through the Cold War fears of nuclear annihilation, as the United States and the Soviet Union circled one another like two little boys in the basement of an apartment building, up to their knees in gasoline, each gathering more and more matches, threatening to strike them.
"The problem of the doubles," as René Girard explicates it, is seen in the judgment of King Solomon (1 Kings 3:16-28) over two mothers each of whom claimed a baby was her own. The false mother accepted Solomon's decision (no pun intended - L. decidere means to divide by the sacrificial knife) to cut the child in half and give half to each mother. The true mother said, no, give the child to the false mother and so allow it to live.
The biblical spirit is always to step back from the mimetically induced rivalry in self sacrifice, turn the other cheek, rather than focusing on one's rival in seething hatred to the point of destroying the rival - and even perhaps oneself - in the maelstrom of sin.
The escalating doubling rivalries seen in many Western governments, and their concomitant stalemating, finger-pointing, and uncompromising dances of death wherein neither side is willing to back down, I fear, is leading not closer to the biblical spirit of self sacrifice but to scorched earth and acceptance of half-an-infant.
I do not know what the solution is. But I am certain that, while the Scimitar threatens to take over from within by sheer population explosion, this mimetic rivalry can only exacerbate all of our present woes.
Pray for the Holy Spirit to intervene. It seems our only hope.
Posted by Athos at 2:45 PM No comments: 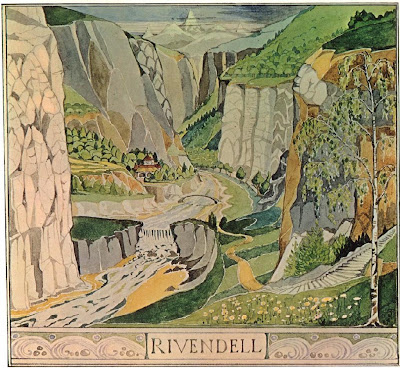 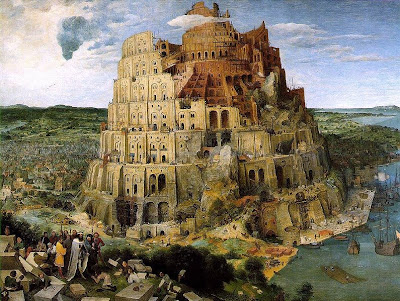 In Praise of the New Knighthood

For the record: The ORB provides Saint Bernard's In Praise of the New Knighthood. As noted earlier, Saint Bernard served as a model for Sir Galahad. How cool is that, as the kids say?
Posted by Athos at 1:26 PM No comments: 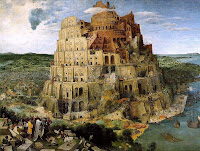 H.L. Mencken is famously quoted as having said, "The urge to save humanity is almost always only a false face for the urge to rule it." I'm lousy at reading persons' motives, actually. What I am dependable about, however, is a hobbit-like love for all things small, human proportioned, and non-centralized.
Nearly every Enlightenment-driven project to "save humanity" in the violent, old twentieth century - from Lenin to Stalin to Mao to Hitler to Pol Pot - all functioned with an ostensible motive of wanting to "save humanity." Each and every one of them ended not only badly, but disastrously in terms of loss of human life. Particularly in one stood in the way of such mere human efforts to "save humanity."
Note well: when the Second Great Commandment of Our Lord (..."and [love] your neighbor as yourself") is sundered from the First Great Commandment ("You shall love the LORD your God with all your heart, all your soul, all your mind, and all your strength"), things end badly.
Again, I do not pretend to understand or fathom his motives, but our Last Self-Help Administration president has noticeable, ostensible distaste for all things Judeo-Christian, which is to say, the ancestral voice of the West.
But it is here and only here that the continuity of keeping together those Two Great Commandments (Mk 12,30-31) is to be found in world history. And an United States without this spiritual continuity has no guarantee - absolutely none - that the perpetrators of heinous atrocities listed above will not again rise. Only this time with the finest motives, say, to provide health care for all; unless you aren't born yet, then you have no rights whatsoever. Not even to be born.
Finally, again I do not question I Wun's motives; they may be completely sincere. I question what has always happened when done the way he he is trying to do it and sans outward honoring Our Lord and the biblical Tradition that alone keeps together the revealed Mandate:
"Seek ye first the Kingdom of God, and all these things shall be yours as well."
- Mtt 6,33
Posted by Athos at 2:49 PM No comments:

Monsignor Charles Pope has an important notion. We need a "new" word for marriage, given the atrocity taking place in our nation's capitol. He suggests, Holy Matrimony.
Oh, and by the by, if you think that this is the end-point, the terminus, of the collapse of social mores that is anthropologically as predictable as fleas on a dog, think again. Those who believe they are engaged in breaking down "unjust" prohibitions of society will not be satisfied until they kick out of the road many, many more. This is to say, if their "alternative lifestyles" feel in any way pinched by these ancestral prohibitions, they will not rest until all hell, literally, breaks loose.
Anthropologically speaking, this break-down of cultural prohibitions is called "sacrificial preparation" (cf. Girard - Things Hidden Since the Foundation of the World).
Posted by Athos at 2:42 AM No comments:

Taken for a Ride on the Back of the Beast

Elizabeth Scalia, The Anchoress, limns about as well as can be accomplished the seething wrath regarding the Last Self-Help Administration and Dem cronies' way of fooling, betraying, and disrespecting the majority of Americans who did not count on a complete overhaul and redesign.
She ends her post by speaking about no one agreeing about anything in the twenty-first century. Methinks, from a mimetic theory point of view, we are nearing the bottom of the swirling maelstrom. What will be there when we crash is not going to be pretty.
Posted by Athos at 1:58 AM No comments: 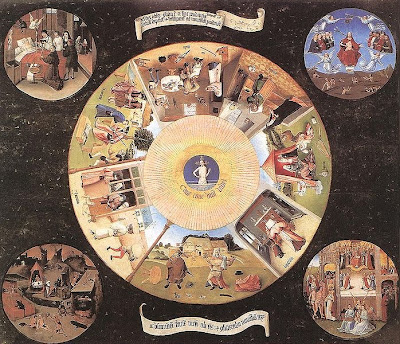 The Seven Deadly Sins and the Four Last Things (1485) - Hieronymus Bosch
(Wiki Commons - Click to enlarge)
Feel free to come visit A Little Guide for Your Last Days blog, your one-stop blog for many resources on holy dying.
Posted by Athos at 4:02 PM No comments:

Labels: My Friend Mort, Reality Check, The Brew That is True

The Spirit is Not Without Witness

Admittedly, pining over governmental follies is ludicrous at best, a waste of time better spent praying at worst. Therefore, let us praise the work of the Third Person of the Blessed Trinity.
This is a nice look at converts to Mother Church. Now comes an interview of a former Scimitar preacher now an Orthodox Christian. Note well where the Holy Spirit first planted the desire in him to study the New Testament.
Posted by Athos at 2:47 PM No comments:

An ideology-driven administration with character disorder tendencies (and what politician, ipso facto, is free of those?) begins its tenure - with sincerity, mind you - doing what it believes is good and right for a country. It continues to do so regardless of the fact that the people it purports to represent no longer want that administration to go that direction. In fact, that administration uses every form of political wile and guile it can muster to take the nation in a direction a growing number of its populace does not want it to go. And it does so spending money that is not in the coffers of that country, but borrows heedlessly from foreign sources while not lessening the country's dependency on foreign sources of petroleum energy. All the while blaming former administration(s) for its woes and shortcomings.
Is this wisdom? leadership?
Really?
Posted by Athos at 1:46 AM No comments:

For my blogging friends Cat and David over at Brits at Their Best. And, should you get a free evening and want a film version of Patrick O'Brien's books, check out Peter Weir's exemplary 2003 Master and Commander. Sea battles, creaking rigging, the Galapagos Islands ... what's not to like?
Posted by Athos at 2:53 PM No comments:

Daniel Mitsui displays a number of his Limited Edition Art Prints for sale here. Included is a sample of a violin-maker's label. Not to be missed.
Posted by Athos at 2:02 AM No comments:

I will merely say, it is a good thing for this to begin to happen. Zenit reports: MUSLIMS, CATHOLICS DISCREDIT RELIGION-INSPIRED VIOLENCE - Vatican and Sunni Voices Join in Historic Declaration.
Posted by Athos at 1:32 AM No comments:

And at the heart of that temple ... 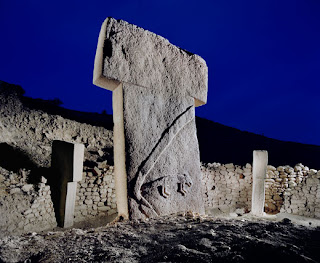 (Wiki Commons)
What René Girard has taught us so well: The temple begat the city:

Standing on the hill at dawn, overseeing a team of 40 Kurdish diggers, the German-born archeologist waves a hand over his discovery here, a revolution in the story of human origins. (Klaus) Schmidt has uncovered a vast and beautiful temple complex, a structure so ancient that it may be the very first thing human beings ever built. The site isn't just old, it redefines old: the temple was built 11,500 years ago—a staggering 7,000 years before the Great Pyramid, and more than 6,000 years before Stonehenge first took shape. The ruins are so early that they predate villages, pottery, domesticated animals, and even agriculture—the first embers of civilization. In fact, Schmidt thinks the temple itself, built after the end of the last Ice Age by hunter-gatherers, became that ember—the spark that launched mankind toward farming, urban life, and all that followed..More>>

Power vs. Truth, Goodness and Beauty

Does this remind you of this in any way? If you take moment to view the video on Israel, you will see that the shrill lies of its enemies include being "victimized" when, in fact, the underlying motive of the enemies of truth, goodness, and beauty is to victimize. They have learned well that today the only recourse to victimization is claiming either to be victims or to be defending victims.
This, in itself, say, two thousand years ago would have been unheard of. The remnants of the Christian West may not be very conscious, but it does know that our very foundations are rooted in caring for victims ("Lord, when did we see you ...?" - Matthew 25, 31f).
But, as Gil Bailie points out, not only does sin take advantage of the Law, sin also takes advantage of the Gospel. Sorting out motives is very important here. Not unlike that thorny topic of "choice". It is well and good to be "pro-choice"; I, for one, believe firmly in free will as part of what it means to be made imago dei. But "choice" and free will without the slightest adumbration of the higher human motive of seeking to carry out God's will with one's free will is no better than commending a pig for rooting out the juiciest tidbit in the slop for itself.
Choice, like claiming victimhood or defending a victim de jour without recourse to the will of God as revealed in Jesus Christ and sustained by the Magisterium of the the Church, is bound to be selfish, self-centered, power-oriented, and mere ideology.
And in the wake of the embargo on such revealed truth about the will of the biblical God in general and seething hatred of Catholic truth in particular, we are apt to see more and more mere ideology, political agendas, and cargo cult paganism as memory of truth, goodness, and beauty recede.
Posted by Athos at 3:26 PM No comments: 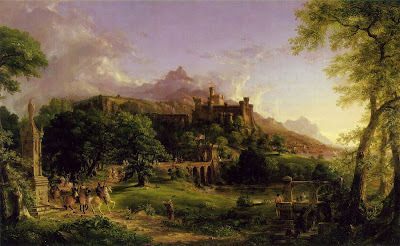