You know it is true:

"No matter how many times the President and his allies repeat it, the Hyde Amendment will not protect the taxpayer from government-funded abortion on-demand in health care," said Dannenfelser. "The truth is, without an explicit exclusion, abortion will be covered in any public plan. Abortion will also be subsidized by our tax dollars in private plans through government subsidies.

Language prohibiting this from happening "has been voted down five times, three times in the House and twice in the Senate just last week," pointed out Dannenfelser. "All this dodging, weaving, and obfuscation by abortion advocates needs to stop."

In fact, under the House healthcare bill (H.R. 3200), as amended by the Capps-Waxman Amendment, the public plan would be explicitly authorized to cover elective abortions. The public plan would be a program within the Department of Health and Human Services, which, as a federal agency, could not pay for abortions with anything other than federal funds.

Douglas Johnson, legislative director of the NRLC, said that "Gibb's statement is one more proof, if any more were needed, that the White House is actively engaged in a political smuggling operation -- an attempt to achieve funding of elective abortion by the federal government, cloaked in smokescreens of contrived language and outright deception."

Combine equal parts hubris, boundless naïveté of realities of fallen human nature, an élan born of inexperience of leadership in a clinch, the puer archetype, and enslavement to the spirit of the age, and this is what we have in the executive office.

Those who abandon the Creed count only on ideologies of fallen, human origin.

Even those for whom mimetic theory is a closed - or, more accurately, never opened - book can see that the accusatory gesture carries with it a near-insurmountable power. Conventional power of observation are no match for it. A sanguine, detached position if silent becomes a collusion.

Pam Geller shows the power of the accusatory - literally in Greek, the satanic - gesture here.

Perhaps the most disturbing feature of this is how mythologically blinding the sacred (speaking anthropologically) is on the self-proclaimed "progressive" minds, unregenerate as they are. Girard merely shines anthropological insight and data at the behest of the Catholic magisterium.

Discard the influence of the Gospel, and the conventional mind rapidly recrudesces to the pagan sacred, the so-called natural man, and the worship once again of the dark gods of blood (Lewis).

See How the Mighty Will Fall

There are, it seems clear, certain personages for whom Catholic truth seems a "doable" target for expunging. They sent their point man to Notre Dame; they have their flunkies in both houses of Congress; they see picking off the stragglers as easy, and dividing the Papal house as not a problem.

But they forget their mortality, their creatureliness. Heed well the words of a wiser head than my own:

So long as we retain the Catholic faith we have always one interest, one loyalty, one enthusiasm in the world to keep us alive ... It does commit us to a philosophy; but it does also take us out of ourselves by throwing our reliance on ... the Personality of Jesus Christ ... by identifying us with a movement, whose triumphs are our triumphs, whose anxieties are our anxieties; life can never be dull for us while the Church is still militant, still has a battle to fight and a position to be vindicated.

- Monsignor Ronald Knox
Posted by Athos at 6:32 PM No comments:

Our Lady of the Rosary 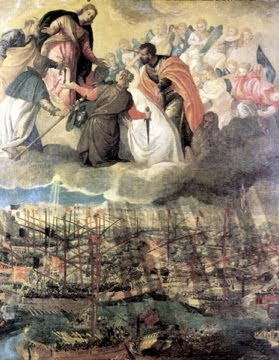 Our Lady of the Rosary
On this feast day, we commemorate the miraculous victory granted the Christian forces over the Scimitar at the Battle of Lepanto. Here is Chesterton's epic poem about it.
Posted by Athos at 2:16 AM No comments: 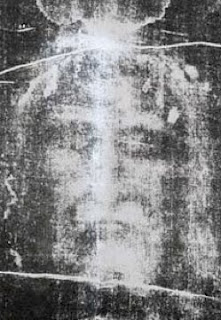 CNA has a story on the Shroud of Turin in response to the claim of an Italian scientist who purports to know how to reproduce it here. [ht: Fr Z]
Posted by Athos at 1:57 AM No comments:

I am beginning to think the man isn't capable of making a good decision. He keeps compounding poor discernment with poor judgment.

Do even his old lefty bedfellows driving around with "Friends of Tibet" Virginia tags agree with dissing the Dalai Lama? 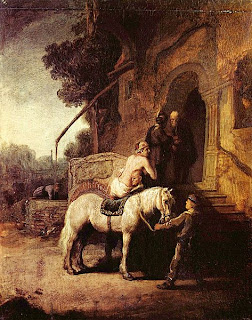 Nevertheless, one must work like there is no praying, and pray like there is no working. On current events, I am at one with Creative Minority Report on this. There will be ample opportunities to answer the man testing Our Lord (!) in Luke 10: "Who is my neighbor?"
Posted by Athos at 2:02 AM No comments: 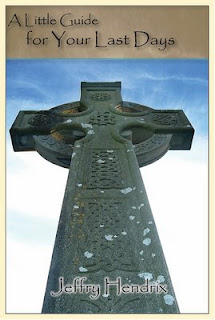 A Little Guide for Your Last Days

Feast of Saint Francis of Assisi 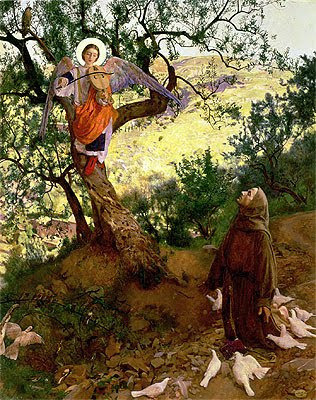 St. Francis of Assisi and the Heavenly Melody - Frank Cadogan Cowper
Posted by Athos at 6:10 AM No comments:

Steven Hayward in today's Washington Post Op/Ed has a piece that asks, "Is Conservatism Dead? No - Just Brain Dead." He writes,

The best-selling conservative books these days tend to be red-meat titles such as Michelle Malkin's "Culture of Corruption," Glenn Beck's new "Arguing with Idiots" and all of Ann Coulter's well-calculated provocations that the left falls for like Pavlov's dogs. There is nothing intrinsically wrong with these books. Politics is not conducted by Socratic seminar, and Henry Adams's dictum that politics is the systematic organization of hatreds should remind us that partisan passions are an essential and necessary function of democratic life. The right has always produced, and always will produce, potboilers.

Conspicuously missing, however, are the intellectual works...MORE>>

Hayward elsewhere dismisses the tea party phenomena as "unfocused" and, as per above, sees Malkin and Beck as not sufficiently "intellectual" to warrant attention (he may have a point there).

Mr. Hayward sees only "Happy Meal Conservatism," which will, he posits, melt away very soon with the morning mist. What he fails to see is the "Happy Meal Liberalism" that he himself espouses. In the doubling rivalry in which he is caught, he fails to see that his stance is the equal and opposite of the conservatism that he and the WaPo scorn and flail at with incessant effort.

If Mr. Hayward wants to find true intellectual vigor, he will have to look to what he and other supposed gatekeepers of public discourse rejected and abandoned long ago; namely, the thinkers and writers of the Catholic Church. One could do worse than the likes of René Girard, recent inductee into L'Académie français, or the Holy Father, Benedict XVI.

But that would take a paradigm shift for Mr. Hayward, not to mention peeling his eyes off of his mimetic rival dance-partner, "conservatism".
Posted by Athos at 3:15 AM No comments:

This should make you more than a little slightly ill. Now we are seeing the squirm meter well into the red. NAMBLA - North American Association for Man-Boy Love Association - is not simply about queering. It is advocacy for the normalization of pedophilia.

And thus his royal I Wun-ness takes the country farther down the spiralling vortex of cultural meltdown. Well done, sir. Well done.
Posted by Athos at 2:43 AM No comments: