I certainly disagree with his pro-choice position, but there is no doubt that Senator Scott Brown gets the voters’ minds and hearts as well as he sees the leftists and Administration ramming health care in a vast effort at power, regardless of bankrupting America and helping abortion-mills even more.
Posted by Athos at 10:12 AM No comments:

C. S. Lewis once sagely noted, "The best lie is the one closest to the truth." That is why this is so important for us to observe, condemn, and pray about.
The proposed health care reform is a conundrum shrouded in complexity wrapped in obfuscation, just the way the leftists and the Administration want it. It purports to be "compassionate", but maintains the language that Rep. Stupak condemns. Abortion equals fewer Americans for whom health care will be needed.
Pray like there is no working, and work like there is no praying. Ora et labora.
Posted by Athos at 5:17 AM No comments:

Cimabue's Celebrated Madonna is Carried in Procession Through the Streets of Florence (1855) - Frederic Leighton
(Wiki Commons)
Posted by Athos at 4:03 PM No comments: 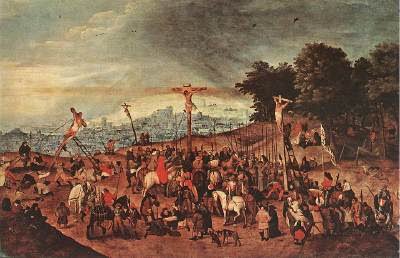 Crucifixion (1617) - Bruegel
Gil Bailie, founder and President of the Cornerstone Forum has quipped, "The ancient world did not have Christianity; it had catharsis."
This shows his predilection for poetry, diction, and sheer determination to pack as much into as little space as possible. Aristotle described catharsis as the purging of the emotions of pity and fear that are aroused in the viewer of a tragedy. We can readily recall such moments: if we are old enough, the moment we heard President Kennedy had been shot; the riveting scenes of the twin towers afire and collapsing in lower Manhattan.
René Girard's mimetic theory posits catharsis as the denouement of both the founding violence of the primitive sacred and that of ritual, one of the three off-shoots of that same primitive sacred (the other two being prohibition and myth).
So, why does Bailie state Christianity as the alternative to the catharsis? After all, our founding violence entailed the horribly violent crucifixion of the One we call Lord and God (Jn 20,28). Yes, that's the rub. The difference lies in these vital facts: (1) the murder of our supreme Victim, Jesus the Lord, did not "take". The crowds left, it is said, "beating their breasts" (Lk 23,48). The sacrificial quotient fell flat in confusion rather than camaraderie.
(2) Second, as St. Augustine noted, our supreme Victim revealed God's will, even from the cross, teaching us to forgive our tormentors. Again Bailie: "On the cross, we would see them as ravenous wolves; He saw us as lost sheep."
(3) The followers of our supreme Victim met Him again, resurrected. Yes, He could do things like walk through walls as we walk through campfire smoke (this argues for a more substantive resurrected Body, not less), and shared fish with them on the seashore (Jn 21,12). But more importantly, He forgave them their cowardice, abandonment, fear, and denial of Him.
(4) It is for this last reason that the earliest witnesses to the power of Jesus Christ waded right into the same crowd on the day of Pentecost that called for their Master's crucifixion not to slay, seek to avenge and wreak revenge ... but to invite them to repent, be forgiven (as He had forgiven them), and be baptized in the Lord's Name (Acts 2,38).
This is the abysmal chasm between catharsis and Christianity. The former always - always - seeks vengeance and reprisal, calling out its "sacred" duty to the dark gods of blood and mayhem. The latter, though imperfectly by Christians, knows that its touchstone is always - always - to forgive as we have been forgiven, because all of us are sinners.
This Lent, let us ponder these strange mysteries embedded on the one hand in the ways of catharsis still very persistent in our world, and, on the other, the Lord who trudged His lonely path to the hill called Golgotha to - one last time in Bailie's words, "shove a stick in the spokes of the primitive sacred's cathartic mechanism."
When we gather at the Altar of our supreme Victim, we say that God is finally vindicated of all our human violence. He came to be our supreme Victim, to show us, once and for all, the way out of our fallen human ways of death, catharsis, and despair. Deo gratias. +
Posted by Athos at 1:10 PM 1 comment:

500 Nigerian Christians - mostly women, children, elderly - hacked to death in the dead of night. Most of the MSM reports it as "ethnic" violence. Get Religion asks some questions...
Posted by Athos at 4:05 PM No comments:

'A Warlike Attitude toward Americans'

The Barrister at Maggie's Farm makes a keen observation here.
One might begin to believe that I Wun has a large accumulation of ressentiment toward the (growing) majority who, having seen where he is leading, are adverse to keep following. But this is not about them. It is about him. My intuition is that what we are seeing is a person caught in a heightened state of scandal, mimetically speaking.
Time will tell, but in the meantime, I invite all to include him in our prayers, knowing that none of us is without sin.
Posted by Athos at 3:37 PM No comments:

Michigan Rep. Bart Stupak (D) says they don't know him well if they think he is going to cave now after all ”the crap” he has been through.
The man deserves our prayers for his chivalry, fortitude, and sheer determination in the face of - yep - evil.
Posted by Athos at 1:52 AM No comments:

In monitoring the Last Self-Help Administration's American Reformation, Chief Justice Roberts speaks candidly yet with restraint about the way I Wun turned the State of the Union Address into a "political pep rally" here.
Posted by Athos at 1:39 AM No comments:

Archbishop Charles Chaput delineates the reasoning of the Church and Catholic education about a recent fiery issue facing a Denver school:

The Church does not claim that people with a homosexual orientation are “bad,” or that their children are less loved by God. Quite the opposite. But what the Church does teach is that sexual intimacy by anyone outside marriage is wrong; that marriage is a sacramental covenant; and that marriage can only occur between a man and a woman. These beliefs are central to a Catholic understanding of human nature, family and happiness, and the organization of society. The Church cannot change these teachings because, in the faith of Catholics, they are the teachings of Jesus Christ.

The policies of our Catholic school system exist to protect all parties involved, including the children of homosexual couples and the couples themselves. Our schools are meant to be “partners in faith” with parents. If parents don’t respect the beliefs of the Church, or live in a manner that openly rejects those beliefs, then partnering with those parents becomes very difficult, if not impossible. It also places unfair stress on the children, who find themselves caught in the middle, and on their teachers, who have an obligation to teach the authentic faith of the Church.

Most parents who send their children to Catholic schools want an environment where the Catholic faith is fully taught and practiced. That simply can’t be done if teachers need to worry about wounding the feelings of their students or about alienating students from their parents. That isn’t fair to anyone—including the wider school community. Persons who have an understanding of marriage and family life sharply different from Catholic belief are often people of sincerity and good will. They have other, excellent options for education and should see in them the better course for their children..More>>

WaPo - A Study in Contrasts

Compare and contrast: the print version of the WasPo's Metro section has this as a front-page story. Yet it totally dismissed this when it happened under its office windows in January.
On the one hand: 1,000 "irate" students emailing and sending vitriol to Facebook. On the other hand: half a million marchers on the streets of Washington, D. C. The former gets plaudits, back-slaps, and affirmation from the WaPo. The latter - nothing.
Methinks the WaPo is in the business of creating news (and reality?), guiding public opinion, and swaying persons in a non-heavenward direction, all to the drum beat of the spirit of the age and the prince of this world.
Posted by Athos at 2:32 AM No comments:

Mark Steyn makes sense out of the Democrats non-stop plummet toward national health care here. Apparently, they all fell in love with the idea after a closed-door weepy viewing of Reds .
Posted by Athos at 1:59 AM No comments:

In the Slow Lane 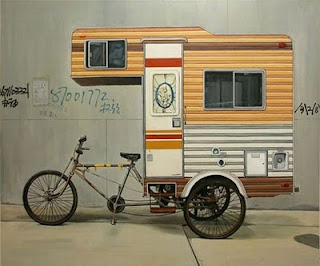 My next RV
Posted by Athos at 4:11 PM No comments:

Benedict - On Suffering and Hope

The Holy Father pulls back from the maelstrom and gives all of us words of wisdom, faith, and theological hope.

"In the face of sin, God shows himself to be full of mercy and he does not fail to call sinners to avoid evil, to grow in his love and to concretely help our neighbor in need, to live the joy of grace and not risk eternal death."

The Holy Father added that the "possibility of conversion entails that we learn to read the events of life in the light of faith, animated by the holy fear of God."

He said that in the presence of suffering or grief, "true wisdom is to let oneself be called from the precariousness of existence and to read human history with God’s eyes, who, always and only wanting the good of his children, by an inscrutable plan of his love, sometimes allows them to be tried through suffering to lead them to a greater good."

More here.
What is important for individual believers to remember is that, while leaders, presidents, gurus, movers and shakers, tyrants, dictators, and potentates come and go, the Holy Father lifts our gaze to something greater and more ineffable to us, our families, and indeed to all the Church.
The entire biblical witness speaks to the reality that God works in the warp and woof of human casuistry, banality, and supposed monolithic hubris (read: if we pass this health care bill, we will have power forever ... muahahahah!).
But human life in focus cannot be lived on such a global scale. Technology has taken us - like Tolkien's palantiri in The Lord of the Rings - to the point of despair over the sheer amount of "is-ness" which we, inevitably, read and use incorrectly.
Human life is best lived and loved on a small scale. Go to Mass. Pray. Work. Love. Help. Forgive and be forgiven. Repeat. Keep the Beatific Vision ever before you as the goal of "health care." And help others go, also, to Heaven.
Posted by Athos at 1:33 AM No comments: