Today is the anniversary of St Don Bosco's recounting his dream to the boys of the Oratory, May 30, 1862. This video by Bob and Penny Lord relates Don Bosco's dream very well. It is indeed relevant to our current age of sin, death, and scandal and its hatred of the Church. [ht: New Advent]
Posted by Athos at 3:43 PM No comments: 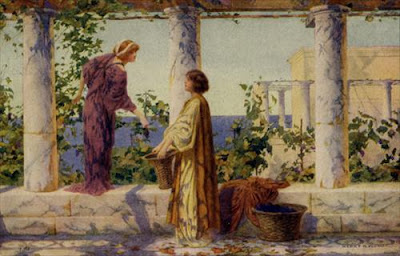 Vine Maidens - Henry Ryland
Posted by Athos at 9:18 AM No comments:

"Los Angeles, you ain't seen nothing yet,” I Won tells a star-studded fund-raiser in Hollywood. "Yes we can!"

The other day I sought a respite from current events by rereading some of the writings of the 18th-century British statesman Edmund Burke. But it was not nearly as big an escape as I had thought it would be.

When Burke wrote of his apprehension about “new power in new persons,” I could not help thinking of the new powers that have been created by which a new president of the United States — a man with zero experience in business — can fire the head of General Motors and tell banks how to run their businesses.

Not only is Barack Obama new to the presidency, he is new to running any organization. One of Burke’s fears was that “we may place our confidence in the virtue of those who have never been tried.”

Meanwhile, Mark Steyn weighs in on I Won's priorities:

The president’s general line on the geopolitical big picture is: I don’t need this in my life right now. He’s a domestic transformationalist, working overtime — via the banks, the automobile industry, health care, etc. — to advance statism’s death grip on American dynamism. His principal interest in the rest of the world is that he doesn’t want anyone nuking America before he’s finished turning it into a socialist basket-case. This isn’t simply a matter of priorities. A United States government currently borrowing 50 cents for every dollar it spends cannot afford its global role, and thus the Obama cuts to missile defense and other programs have a kind of logic: You can’t be Scandinavia writ large with a U.S.-sized military...

Read all of Steyn's Speak Softly and Carry a Big Teleprompter.
Posted by Athos at 4:23 AM No comments:

President Obama's Notre Dame speech on abortion was applauded by the mainstream media, quoting his call for more "open hearts, open minds, fair-minded words." But except for the pro-life, and some conservative forums, there was no mention of Obama's omission of his own documented, chilling record on abortion that proves what he also said on that Sunday:

"No matter how much we want to fudge it ... the fact is that at some level, the views of the two camps are irreconcilable." I watched the full-scale coverage of the speech on Fox News; and the reporting, before and after, did not inform the viewers - as one glaring example - that when Obama was an Illinois state senator, he voted three times against a Born-Alive Infants Protection Act that required medical care for an infant, born alive human being, during a botched abortion.

When, during his Notre Dame speech, a protester - before being removed - called Obama a "baby killer," he was making a literal point.

Obama has also clearly pledged a "litmus test" for his choices for the Supreme Court. In a July 17, 2007, speech to the Planned Parenthood Action Fund, he stated: "With one more vacancy on the Supreme Court, we could be looking at a majority hostile to a woman's fundamental right to choose for the first time since Roe v. Wade. The next president may be asked to nominate that Supreme Court justice."

Is this what he means by the need for "open minds" in the debate on abortion?

At Notre Dame, Obama glided away from the truth when he said: "Let's honor the conscience of those who disagree with abortion, and draft a sensible conscience clause, and make sure that all of our health care policies are grounded in clear ethics and sound science, as well as respect for the equality of women."

"The Obama administration has begun the process of rescinding sweeping new federal protections that were granted in December to healthcare workers who refuse to provide care that violates their personal, moral or religious beliefs." How do you define "conscience," Mr. President?

I wonder. Anthropologically, could this and this have happened without this?
Posted by Athos at 5:59 PM No comments: 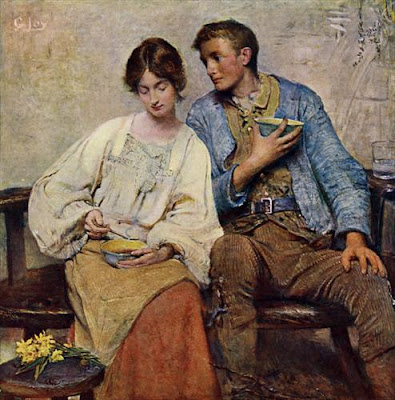 This is not quite the same as today's fawning sycophantism. For one thing, there is this. Americans may be filled disordered passions, resembling Flannery O'Connor-esque rubes, but they rarely let a mere political figure harbor delusions of grandeur too long.
Posted by Athos at 1:57 AM No comments:

How Europe Can Be Saved - BXVI

ROME, May 27, 2009 (LifeSiteNews.com) - On the Sunday of the Ascension, Pope Benedict XIV, while visiting the ancient town of Cassino south of Rome, told a group of faithful, perhaps without their having noticed it, the secret to saving Europe.

Anyone who has learned to be at all functional in the world has learned that there is an ordering of priorities necessary before any task can be undertaken. One makes a little list of things to do. In regard to the saving of Europe, tottering on the brink of demographic, spiritual and cultural extinction, Pope Benedict has laid out his list of things to do many times.

This past Sunday the pope told the faithful at Cassino to "defeat inner evil" - that evil that we carry around with us all the time - with prayer, before tackling the evils of the world with action ...

Read all of How Europe Can Be Saved here.
Posted by Athos at 2:39 PM No comments:

Canary in the Mineshaft

Mark Steyn proffers a cool-headed analysis in Israel Today, the West Tomorrow.
Posted by Athos at 2:19 AM No comments: 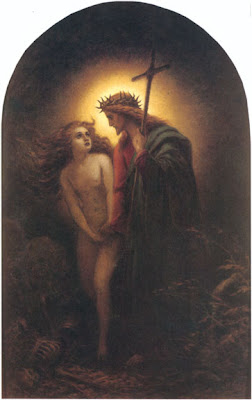 The Valley of the Shadow of Death (1866) - Sir Joseph Noel Paton
Does this painting seem to you gratuitous in the figure's nakedness, vulnerability, helplessness? If so, you have not yet been to a hospital with the diagnosis of cancer and the need of surgical extrication of a tumor, whereas a week prior you had been lifting weights and running two plus miles.

Sir Joseph Noel Paton catches it perfectly. Perfectly. Just wait. You will see.
Posted by Athos at 4:52 PM No comments: 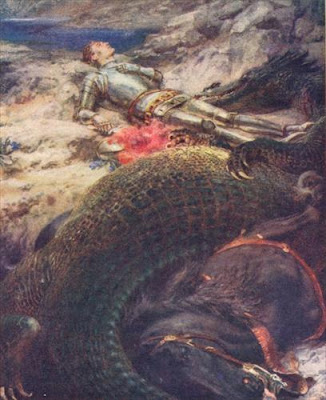 But it is worth it. Join our merry band!
Posted by Athos at 11:13 AM No comments:

Perhaps this kind of objection makes a great deal of sense, seeing the results of this executive report.
Posted by Athos at 2:04 PM No comments: 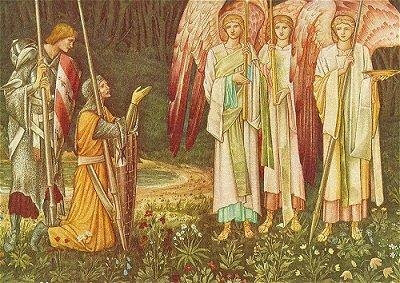 The Vision of the Holy Grail - John Henry Dearle
Posted by Athos at 6:14 AM No comments: