Daniel Mitsui tells of (and shows) A Hidden Chapel Where the Catholic Faith Never Died during and after the so-called English reformation.
Posted by Athos at 3:14 AM No comments:

Gerald Celente - the most trusted name in trends - sits down for an exclusive interview with RT's Anastasia Churkina to talk about what the future holds for America:

We know that the supervolcano that IS Yellowstone - its caldera is vast - erupts on the average every 600,000 years. We are overdue at present for another eruption.

If you enjoy fiction based on fact, and a good disaster flick now and then, I recommend Supervolcano – It’s beneath Yellowstone and it’s going to blow. I discovered this little made-by the BBC gem this summer and have since purchased the DVD. It's based on good science and, in my opinion, a better romp than Dante's Peak if for no other reason than it IS going to happen. It's just a matter of time.

If it gives you a case of the heeby-jeebies, you can always console yourself with a copy of my book, A Little Guide for Your Last Days. Cheers!
Posted by Athos at 2:55 AM No comments:

Feast of the Guardian Angels

Guardian Angels by Monsignor Charles Pope.
Posted by Athos at 1:50 AM No comments: 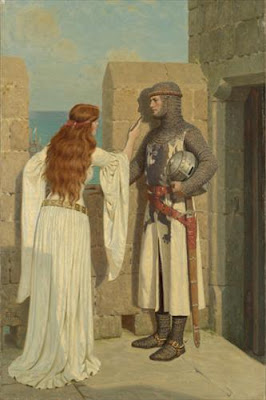 And I'm Not Talking Col. Sanders

As The Anchoress presents, and a psychotherapist and self-proclaimed "recovering liberal" says:

The economy is tanking -- Obama laughs. We are accumulating crippling debt -- he and the other Democrats go on a spending spree.
Millions take to the street for a peaceful 9/12 march. He doesn't notice. We oppose the government controlling our lives, especially health care, but he rams legislation down our throats anyway.
Our allies have started to realize that Obama doesn't care about them either. He snubs Gordon Brown, returns a statue of Winston Churchill (how disturbing is this?), and insults the Brits with DVDs and iPods. He betrays the Poles and the Czechs, and leaves Israel hanging from a limb.
Obama does have sympathy for the devils, though, the Chavez's and Castro's of the world. Maybe he views them as brothers, fellow victims of the monstrous United States. Perhaps Obama is all Vive le Revolucion.
There are endless red flags, aren't there? The covert government of antisocial Czars; the cozy ties to Bill Ayers, maybe George Soros. And who knows what else, because Obama's private world has been hermetically sealed...MORE>>

One more thing: One of my basic suppositions is that true conversion is only possible according to the proximity of one in relationship to and with the Blessed Trinity. No amount of education, training, cerebral prowess, or noble mindedness can truly alter one at the deepest levels unless it takes place with deep regret, remorse, contrition, and a resolve to align oneself to the life of Our Lord. And this with sacramental grace aplenty.

Without the above, we merely use what we learn to work the template with which we're born. In my case, I will probably always write and speak with a Protestant accent; a weary and grateful refugee in the realm of Mother Church. In the case of President I Wun, I agree, it seems, with the reflections of a perception and observant chap-ette, one I. E. Ikenga in her essay, Obama, the African Colonel.

This is going to get really bad.

A reflection from long-time mentor and fine fellow, Gil Bailie:

Promiscuity means the lack of standards by which to judge or sort out things. Psychological promiscuity ... is the kind of involvement in mimetic contagion and mimetic desire which reaches the point [that] the self becomes unstable, because of the multitude of its influences. We do not have to be influenced by a multitude of people [in a negative way]; all that influence simply needs to be thematized. We do not want to turn off the influences of other people; we need other people ... The way the Christian economy works is we reach God through Christ, we reach Christ through each other. So we don’t want to be stopped being influenced, but that influence needs to be thematized or else it becomes polymorphously perverse -- and that is the mimetic crisis.

Politicians, by the way, depend upon promiscuity to confusticate the voting public. It is like spinning someone around with a blindfold on. Thus, the more citizens who are bewitched, bothered, and bewildered - or, in a word, promiscuous - the better for the politician.

It pays to have too many influences. It keeps the voting public helpless and more easily "governed".
Posted by Athos at 2:16 AM No comments:

As He Knew They Would

The Democratic Party politicians yesterday made President I Wun a liar.
Posted by Athos at 2:04 AM No comments:

Answer to Track 16 - Knox on Doctrine

The defined doctrines ... are guaranteed by a promise of Divine guidance; whatever else is or is not true, these must be true. Therefore, you must resign your conclusions, you must submit your reasoning processes to the refutation of this higher certainty.

And my two bits: my experience of "Catholic sacramental sensitivity" (G. Bailie) always has found theme and substantiation in doctrine. Doctrine is not something to jibe against the goad; doctrine is the Word formulating at a distance at which we humans can formulate both faith and reason. No reason for resentment here. Move along.
Posted by Athos at 5:19 PM No comments: 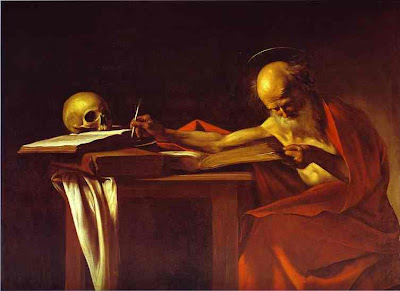 Iran Around the Rosies ..

This, of course, is a no brainer in the vernacular of the peasantry. Only one besotted with a naïveté born of monumental romantic - and therefore soon-to-be nihilistic - Gnosticism could believe otherwise.
Posted by Athos at 1:55 AM No comments: 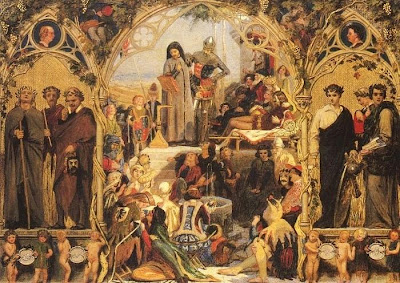 The Seeds and Fruits of English Poetry
Posted by Athos at 3:33 PM No comments:

A pretty good estimate of where things stand at present:

Increasingly in Washington over the last few weeks, we have heard this assessment of the president’s health care upheaval prospects: Something will pass, because the president and his party have such large majorities (nearly 60 percent) in both chambers of Congress that it is inconceivable that they could not bludgeon their way to the necessary majorities. But victory will be the product of power, not debate – and it will cost them control of the House in the next election.

The problem for the president is that he has lost the health care debate. No one in either party or in the media has dared speak this fact as of now, but it is inescapable.

The mind that is Catholic is open to all sources of information, including what comes from Revelation.

Revelation is not opposed to reason as if it were some blind source. Revelation has its own intelligibility that can be grasped and compared or addressed to what we know in reason.

Catholicism does not define reason as if it only meant a reason that follows some methodology where the terms of the method decide what we are allowed to see or consider.

The very definition of mind is that power that is open to all that is. We human beings are not gods. But we do know and the object of our knowledge is all that is.

It is characteristic of the Catholic mind to insist that all that is knowable is available and considered by us in our reflections on reality. 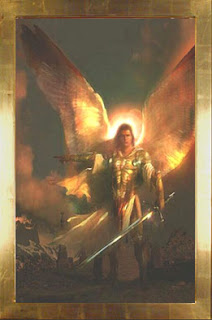 On this Feast Day of Sts. Michael, Gabriel, and Raphael, Archangels, Carl Olson kindly distills down from Peter Kreeft's tome the 12 most important things to know about angels.
Posted by Athos at 1:46 AM No comments:

In 1945, Adolf Hitler ordered his minister of armaments Albert Speer to carry out a nationwide scorched earth policy, in what became known as the Nero Order. Hitler felt that the German people had shown themselves to be weak, and undeserving of a leader such as himself (emphasis added). Having failed their test of character, they should be condemned to destruction. Speer, who was looking to the future, actively resisted the order, just as he had earlier refused Hitler's command to destroy French industry when the Wehrmacht was being driven out of France, and managed to continue doing so even after Hitler became aware of his actions. Millions of civilians starved or froze to death because of scorched earth strategy during the war, especially in the Soviet Union.

What will happen if the ideologically Gnostic- romantic-in-chief's numbers make him lose, I wonder? Will the will of the people outweigh the his seemingly irrevocable will?

The race card is moot. The hubris card is obvious. A smidgeon of humility would lend I Wun a grreat deal of credibility, if it be honest.

This Should Be Interesting

What kind of bedfellows (pun sorta intended) will be created from this development?
Posted by Athos at 3:11 PM No comments: 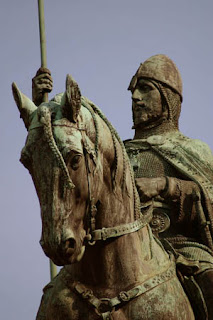 King St. Wenceslas
Posted by Athos at 2:18 AM No comments:

Distracted Hubris Can Be Dangerous

Apparently this discernment is gaining traction. Correctly, as I predicted awhile ago.

Of course, it isn't just him.

Don't you feel sorry for such distracted persons? They need to keep their eye on the ball ...
Posted by Athos at 1:39 AM No comments:

Knox - Death and Our Christian Dead

Every man born into this world lives in a condemned cell; the warrant for his death will be issued not at an hour of his own choosing.

+
There are so many other things to be done in the world, so many echoes that deafen us, that we are apt to forget the first principle of our probation, which is this: that the most important moment of our lives, the moment around which all the rest of our life ought to be grouped as its centre and its climax, is the moment when we leave it.

+
Oughtn't we to think of our Christian dead as a great multitude surrounding us, like the lights of a city when you look across the valley at evening; some brighter, some paler, some nearer, some more distant, but all reflecting, each in its degree, the beauty and the majesty of God? Some will need our prayers more than others; some, more than others, will be able to bestow a blessing on us in return.

- Monsignor Ronald Knox
Posted by Athos at 4:21 PM No comments: 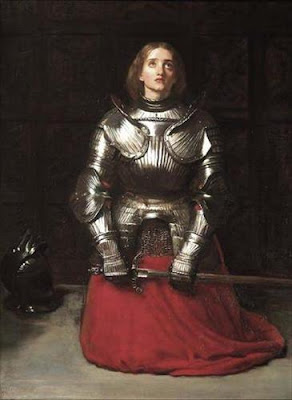 An atmosphere of crisis takes people different ways. Some get so wrapped up in their work that they never look beyond the edge of their own cabbage-patch. Others think in continents, and are depressed, nowadays, by the exercise; what is the use of doing anything, when everything is going from bad to worse? The Christian ought to rise above both those temptations. His daily work, his common human duties, are a charge entrusted to him. He believes in the sacrament of the present moment; what might happen, what is likely to happen, he leaves in the hands of God.

The Pope in Prague Reading about the talks given by the Holy Father reminds me with gratitude of his deeply thinking and feel heart of a Shepherd of souls.

And, he is quite a fencer.

I heard this fellow, Don Rimer, speak when I lived in Tidewater Virginia. He was very knowledgeable about the occult, from a law enforcement perspective. With the rising tide of the neo-pagan, his expertise will continue to be in demand.

In cases of ritual violence like that investigated in the linked article, law enforcement agencies should also keep in mind Dawn Perlmutter at Symbol Intel, a highly respected resource trained in both Generative Anthropology and mimetic theory.
Posted by Athos at 2:35 AM No comments: