More Than Watchmen for the Morning 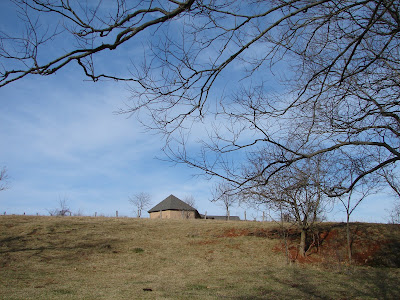 Guesthouse - Holy Cross Abbey
(From the Shenandoah River side)
Posted by Athos at 12:34 PM No comments:

Knox - Clinging to the Golden Calf

MOSES WAS SENT TO deliver his people from bondage, and from a bondage to which they had grown accustomed, so that they loved their fetters, and were constantly turning on him and asking why he could not leave them alone. That was his chief difficulty - they did not want to be set free. And even when they had been set free, and led out into the wilderness, they were always hankering after the luxuries they had enjoyed in Egypt, always murmuring against the rough fare of the desert. While Moses was up in the mountain, the people he had left behind him in the valley made a golden calf and fell to worshipping it, as they had worshipped it in Egypt. All his life he preached to an incredulous race, condemned, for their hardness of heart, to forty years' wandering in the wilderness before they achieved their promised resting-place.
Bernadette was sent to a world in bondage, and to a world which rejoiced in its bondage. Those apparitions of hers took place in the middle of the Victorian age, when mankind, or at any rate, the richer part of mankind, was enjoying material plenty to a degree, I suppose, unexampled before or since. And the presence of material plenty had given rise to a general spirit of materialism; a spirit which loves the good things of this life and is content with the good things of this life, does not know how to enlarge its horizons and think about eternity. She was sent to deliver us from that captivity of thought; to make us forget the idols of our prosperity, and learn afresh the meaning of suffering and the thirst for God. That is what Lourdes is for; that is what Lourdes is about - the miracles are only a by-product. You might have thought that in our day, when prosperity has waned and all of us, or nearly all of us, have to be content with less, we should have needed no longer these divine warnings from the rock of Massabieille. We know that it is not so; we know that in this wilderness of drifting uncertainties, our modern world, we still cling to the old standard of values, still celebrate, with what conviction we may, the worship of the Golden Calf.
- Ronald A. Knox
Posted by Athos at 5:09 AM No comments: 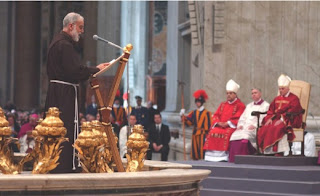 Father Raniero Cantalamessa, preacher of the Pontifical Household, continued his series of homilies given in the presence of the Holy Father this Advent. He began with scientism, secularism, and, now, rationalism. Full text of his talk can be viewed here.
Posted by Athos at 1:59 AM No comments: 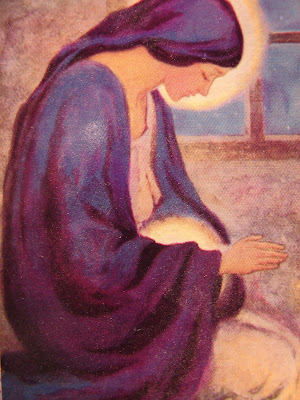 Waiting
Posted by Athos at 1:41 AM No comments:

The connection is obvious, both from the popular idea and from the profound depths of René Girard's mimetic theory: abortion and the satanic.
Posted by Athos at 1:12 AM No comments: 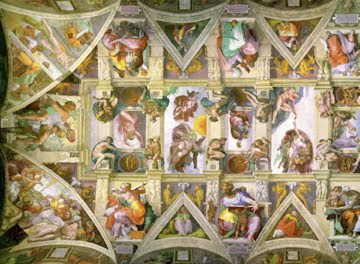 Here are two important and wonderful notions: Remember the Holy Father's intentions for December and listen to the sublime sounds of Advent provided by the Pontifical Musical Chorus of the Sistine Chapel all rolled into one post at Catholics United for the Faith. How is that for Truth, Goodness, and Beauty?
Posted by Athos at 1:12 AM No comments:

Coming Up for Air

To my mind, Ronald Knox puts his finger on the primary problem of western culture, the demand for novelty. This is the motive for the rejection of Christianity in general and Catholic faith and morals in particular. This is the motive for the overweening coddling of the Scimitar into the heart of the west ("Hey, it's not threadbare 'Me 'n Jesus'. Let'em have their prayer service breaks at work and build their special toilets. Stop being intolerant, ya moron. HEY! You Christians! Stop foisting your stupid faith on the rest of us with your 'Merry Christmas' and caroling!").

Deeper still, Knox in his Broadcast Minds delves into the dangers of scientism and shrill atheism that he began to notice in the mid-twentieth century. These sniping and brattish anti-God types he saw would lead to what we now see today as the "new atheists." As opposed to the civil, urbane, and even friendly arguments between, say, Chesterton and Shaw, Wells, Russell, and Darrow, the so-called "new atheists" sound like Dan Quayle debating with their cat-calling and boorish behavior.

Perhaps it is the Sesame Street mentality all grown up, but what passes for consideration of the meaning of things today is a rat-a-tat-tat of sound bytes rather than quiet contemplation, an unconscious giving-in to disordered passions (Gr: epithumeia ( ἐπιθυμίᾳ ) rather than what we see supremely in, for example, the Holy Father, Benedict XVI and his works.

I see it more and more - sadly - in the classroom; even in the classroom of a Catholic school. It seems an espousal of a mere group of carnal sensations, a giving-over of value delineation to the most outrageous expressions of pop culture, and a surly yet absolute assurance that all-things-young define the terms of public discourse.

Of course, Girard would see - and does, no doubt see - all this as the furtherance of the cultural meltdown ("sacrificial preparation" - Things Hidden Since the Foundation of the World) going on apace.

I say, on this Gaudate Sunday, that I am humbled by being given the grace to find my way into the sole place of solace in said cultural meltdown, the Catholic Church. May more and more and more stumble, half-frozen, tormented, and bereft of hope into Her gracious arms. Pray that Our Lady of Guadalupe will bring more conversions to the sad old, sinful old, West. 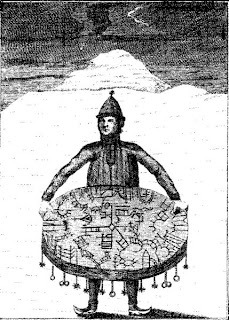 More evidence that once people stop believing in the revealed deposit of faith entrusted to the Church, they'll believe anything.
Posted by Athos at 3:06 AM No comments: