Anthony Esolen, translator of Dante and professor at Providence College, writes on the Bard of Avon in Desires Run Not Before Honor.
Posted by Athos at 6:01 AM No comments:

Love in the Ruins 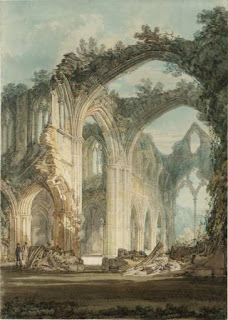 The Chancel and Crossing of Tintern Abbey, Looking towards the East Window (1794) - J. M. W. Turner 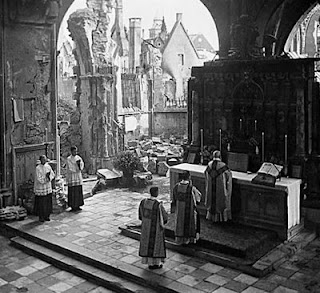 And more recently, the Church Militant soldiers on ...
Posted by Athos at 3:41 PM No comments: 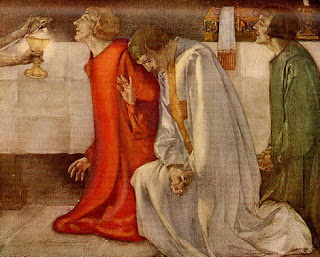 Why I don't belong to a juggernaut like that and choose this instead.
Posted by Athos at 1:58 AM No comments:

Kreeft - Learning from the Scimitar

Must Read Dept. - Peter Kreeft's Between Allah & Jesus: What Christians Can Learn from Muslims
Posted by Athos at 1:53 AM No comments:

ABC News reports that a Dutch "Adult Shop" is going to be giving away Pope Condoms. Brilliant.
I mean really. It is truly a proportionate response to the insurmountable and incessant barrage of propaganda coming from the Vatican. You change channels on your television and all you hear is what the Pope and the Vatican has to say about sex and morals (to steal friend and mentor Gil Bailie's schtick).
It is striking a blow for human freedom and dignity. And it makes me proud to be a member of the human race.
Posted by Athos at 1:18 PM No comments:

Your Peace or Mine - Drawing a Picture

Brad Thor quotes Sam Harris:
The controversy over Fitna, like all such controversies, renders one fact about our world especially salient: Muslims appear to be far more concerned about perceived slights to their religion than about the atrocities committed daily in its name. Our accommodation of this psychopathic skewing of priorities has, more and more, taken the form of craven and blinkered acquiescence.
There is an uncanny irony here that many have noticed. The position of the Muslim community in the face of all provocations seems to be: Islam is a religion of peace, and if you say that it isn’t, we will kill you. Of course, the truth is often more nuanced, but this is about as nuanced as it ever gets: Islam is a religion of peace, and if you say that it isn’t, we peaceful Muslims cannot be held responsible for what our less peaceful brothers and sisters do. When they burn your embassies or kidnap and slaughter your journalists, know that we will hold you primarily responsible and will spend the bulk of our energies criticizing you for “racism” and “Islamophobia.”
Our capitulations in the face of these threats have had what is often called “a chilling effect” on our exercise of free speech .. MORE>>
Posted by Athos at 1:49 AM No comments: 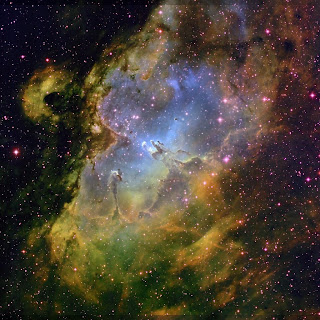 OFTEN ONE WILL HEAR atheists proclaim that we are here due to the random dance of atoms occurring in a vastly uninhabited, ferociously beautiful, yet totally fluke-filled universe. We are "the stuff of stars," as dear old Carl Sagan said.

And I, of course, agree with Carl's statement, being an Earth Science middle school teacher. We are indeed begotten from the star matter (plasma, baby - and that's as close as I ever want to get to it).

We dwell in a tiny cocoon of atmosphere around our tiny, garden planet, protected from solar radiation by an electro-magnetic field that is produced because the outer core of our planet is a billion-trillion tons of molten iron spinning around the inner core of solid iron at about one thousand miles an hour (I am not making this stuff up - who could?) which sends the EM field out one pole, around the Earth, and back in the other. This, by the way, flips every so often, causing the mid-Atlantic ridges to show the reversal in polarity with geologic time scale frequency. Your compass will one day point south. Yep.

And besides this, we are beings dwelling in this tiny, protected, garden planet that can imagine all of this in our puny minds which are inextricably intertwined somehow with seven pounds of gray matter between our ears and who can talk about it with one another due to the manufacture of language in the Wernicke region of our brains. (As Walker Percy said of this in his famous Thomas Jefferson lecture of the humanities in 1989, "The Fateful Rift: The San Andreas Fault in the Modern Mind" - "Draw me a picture of us 'picking out language' from the Wernicke region. Go ahead. Draw me a picture.")

And as G. K. Chesterton pointed out, "It is an act of faith (on the part of scientists, largely unacknowledged) to assert that our thoughts have any relation to reality at all."

So, I find it remarkable that atheists are atheistic, given the above facts. What an amazing pile of remarkable "coincidences" and "random dance-steps!"

My Catholic faith, on the other hand, has produced some of the greatest scientific thinkers of western civilization, bar none, and depends completely upon both common sense and high rationality the likes of which cannot be found elsewhere.

And if our Creator was kind enough to allow each of us into the greatest Adventure of all - namely, being blessed enough to be born and avoiding that man-made obstacle, abortion - surely, surely, we can depend upon Him to see that that which follows this biological existence will be at the proper focus distance to see, provide sufficient existential and ontological substantiation to still remain His be-ings (if it be His will), and be a part of something at least, if not more, miraculous than all astonishing existence we now share.

For more important facts, get your copy of A Little Guide for Your Last Days.

It Is Your Choice

Here is an interesting juxtaposition. On the one hand, we have Hendrik Hertzberg writing in the New Yorker magazine.

And on the other hand, we have Bevil Bramwell, OMI, writing at The Catholic Thing.

Time was, I would have trusted the former for truth ... if not goodness and beauty. But over the years and with time, I realized that the latter speaks much more truth AND goodness and beauty. Why? Because the latter can understand the former, and not vice versa.
That is to say, Hertzberg criticizes the Catholic Church for a silence surrounding the sex abuse scandal, and rightly so. But he neglects to point out that the sex abuse going on prior to steps to alter those nefarious actions was no more likely than sex abuse going on just about everywhere else, including Protestant churches, public schools, and other places in the public square.

Since Benedict XVI's pontificate, sex abuse in the Church has dropped exponentially.
But who cares when you want to reduce to rubble an "institution" that is protected by "a nimbus of mystery, pomp, holiness, and, in the case of the Pope, infallibility," to use Hertzberg's turn of phrase?
I don't know much, but this I do know: Hertzberg and his ilk have nothing - absolutely nothing - to offer human beings in terms of soteriology, not to mention epistemology, or anthropology.
The Catholic Church, on the other hand, knows it is comprised of sinners - the Holy Father goes to confession too. And the truth, faith, reason, and morals vouchsafed by the Catholic Church are worth giving your life for and, in some instances, going to your death for.
Who, after all, are you going to trust? As Carlyle Marney once said, "If it don't play in the cancer ward, it ain't the gospel." Amen and amen.
Posted by Athos at 4:17 PM 2 comments:

Blessed are the Meek

Memo to self: Next time I feel sorry for myself remember Youn Seuk-in.
Posted by Athos at 3:24 PM No comments:

He Got Him a Case of Whoop A**

Sorry for the deplorably low level of discourse. I don't know what came over me. It simply seemed apropos considering the subject matter here.
Posted by Athos at 3:14 PM No comments:

For the record: Margaret Somerville's Leaving a space for religion in the public square.
Posted by Athos at 2:04 AM No comments:

Newman - Red Meat for the Soul

It isn't surprising that I have a strong and lasting admiration for British Catholics. They have been through alot. Read and inwardly digest the following soul food from Blessed John Henry Cardinal Newman: 41 Quotes from my favorite British Cardinal.
Posted by Athos at 1:46 AM No comments:

It couldn't happen to a finer fellow, priest, and soul guide.
Posted by Athos at 1:39 AM No comments:

Mitsui - Mass Media and the Eucharist

A longish essay to be read on the apparatus of dancing electrons and pixels - i.e., computer - but worth the time. Print it off and read it if you prefer. Daniel's Mitsui's important essay, Mass Media and the Eucharist.
Posted by Athos at 5:38 AM No comments:

Enemies and Friends of the Church 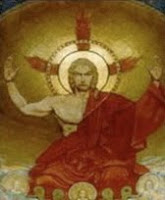 The sum is greater than the parts in the on-going battle of neo-paganism against the Catholic Church. It goes like this. The NYT keeps up its full frontal attacks and insinuations. The "progressivist" secularists' other lap-dog media organ, the WaPo, shines a light on potential targets (read: victims and their training facilities). The vanguard berzerkers begin their first attempts to rout the normal worshipers, the latter having no full appreciation of the lust for the primitive sacred that carries the former into hallowed spaces of our Eucharistic Lord.
The overlords of this scheme, meanwhile, watch from their oligarchical nests, smug in the knowledge that they set the agenda and continue to do so, apparently far removed from the melee.
Understand that this work against God's Church is not unlike that carried out during Lord Cecil's English "reformation" (sic.) and the Mexican Cristiada. The enemies of the Catholic Church want to decimate Her and strike fear and doubt into the hearts of all those whom She wants to help bring to salvation in this life and Eternal Life in the next. Her enemies would have us all join them in their naive utopian pipe dreams and nihilistic relativism. Now is decidedly not the time to buckle.
It is a subtle and well-planned effort. We must be "wise as serpents and as innocent as doves," as Our Lord admonishes us (Mtt 10,16ff). We are in for difficult days; but perseverance will bring its eternal reward. Find strength in numbers of the faithful; pray constantly; receive the sacramental strength and grace of the Holy Eucharist.
Be one in the Lord in Marian chivalry.
Posted by Athos at 3:46 AM No comments: 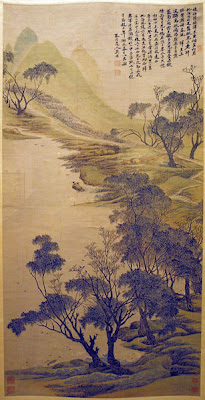 Spring Comes to the Lake - Wu Li
(Wiki Commons)
Posted by Athos at 1:31 PM No comments:

Mark Steyn connects the dots in ways that, say, Attorney General Holder juuust doesn't want to. Why is that, do you think?
Posted by Athos at 2:48 AM 1 comment:

Use Your Suffering Chivalrously

Before leaving Portugal, Pope Benedict asked the suffering and dying to help save the world.
Great advice, Holy Father. I was bolstered to hear you saying it.
Posted by Athos at 2:13 AM No comments: