Endorsed by Geert Wilders, Mark Steyn, Brad Thor, The Jerusalem Post, yes. But you might want to use cash to buy this.
Posted by Athos at 2:03 AM No comments:

Marian Chivalry is Quite Alive 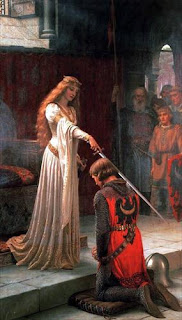 A hale and hearty invitation once again. Consider the following:
CORPUS CHRISTIANUM is an international Private Association of the Faithful, open both to men and women, dedicated to praying for a renewal of Christendom.

Marian in character and guided by a Catholic chivalrous spirit, Corpus Christianum members pray daily for the following key points:

- The renewal, unity, and spread of Christendom
- The Supreme Pontiff and all priests/religious
- The protection of Christians around the world
- The restoration of the family
- The conversion of sinners and the sanctification of all people

We are looking for courageous souls who are willing to take up the standard of Christ the King! We invite you to review the association's statutes for more information about the organization and its obligations.

Read more about Corpus Christianum.
Posted by Athos at 3:47 PM No comments:

Now we know.
"Anjoum Noorani, 31" writes Damien Thompson, "was the leader of the Foreign Office’s Papal Visit Team which drew up a document suggesting that the Pope should launch his own range of “Benedict” condoms and open an abortion clinic. He’s been moved to “other duties” after he gave authorisation for the memo to be sent to Downing Street and three Whitehall departments."
What seems telling to me is the look on Mr. Noorani's face. He clearly is saying, "So, what do you plan to do about it?"
Tell me I'm projecting.
Like the Scimitar in general, he does not expect a Christian form of fatwa placed upon his head; it's been thousands of years since sanctioned violence was acceptable to biblical peoples.
Ross Douthat recently observed that the Scimitar's recent threat (or promise?) to the creators of "South Park" that they would end up like Theo van Gogh was a reminder that Islam is "just about the only place where we draw any lines at all."
For students of mimetic theory, this means that the Scimitar is very nearly the only enforcer of the anthropologically sacred in the world today. The Christian faith, on the other hand, has to force itself to even consider the possibility of performing legitimate defense and chivalry of any kind: a clear indication that as Chesterton pointed out, the contemporary world is filled with Christian virtues gone mad.
We must find an ennobling and truly chivalrous alternative to playing possum or playing dead to such affronts. It must take into account the real demands of Our Lord who, if you remember, drove and lashed the money-changers from the Temple (Mt 21,12-13), integral participants in the concretization of the sacred. We must wage the kind of holy knighthood that will neither make us blush because of its unwarranted violence nor squirm because we sat on our hands and did nothing.
What is that alternative? That chivalrous alternative? I do not know with precision. The image of Reepicheep swatting Eustace Scrubb (Voyage of the Dawn Treader) with the flat of his sword comes to mind.
But whatever chivalric measures begin to be taken they must wipe that smirk off his face and make his smarmy, self-righteous self think twice about spitting on the Holy Father again.
Posted by Athos at 3:48 PM No comments: 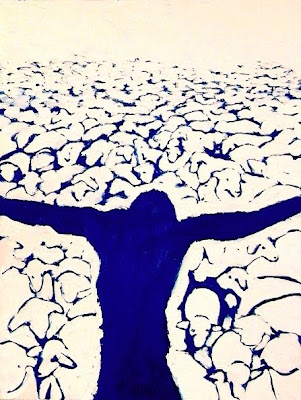 Essential reading: Father Dwight Longenecker on hearing - and heeding - the Good Shepherd's voice.
Posted by Athos at 3:03 AM No comments:

Our Lady of Good Counsel 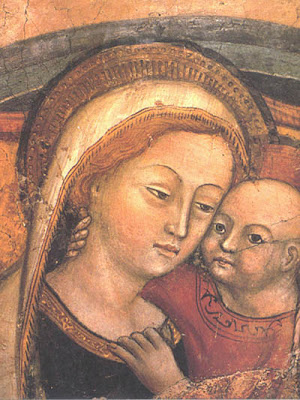 Our Lady of Good Counsel of Genazzano
Posted by Athos at 2:40 AM No comments:

Monday Morning - for the record

Two offerings well worthy of an investment of your time:
Ayaan Hirsi Ali Talks About South Park, Theo Van Gogh, and Death by the Scimitar - “There is one religion that is claiming to be above criticism.”
Obedience in Christ, Bishop Slattery's sermon tells us is the cause of our hope in the midst of suffering, persecution, lies, and indifference in and of the world.
Posted by Athos at 1:54 AM No comments:

Hell in a Handbasket

I know and you know the Holy Father wants to help the dwindling faithful in England by visiting. But at some point it becomes apparent that the number of faithful may be dwarfed by those human embodiments of screeching demons who will welcome his visit when hell freezes over.
Perhaps it is time to let old England go to that untoward place for reprobates in the proverbial hand-basket.
Otherwise, let those sitting on their hands in England speak up for what is left of truth, goodness, and beauty in a world destined to become a wasteland of relativism so sought-after and so well-deserved by secularist fools and village atheists like Hitchens and Dawkins.
Posted by Athos at 2:49 PM No comments: 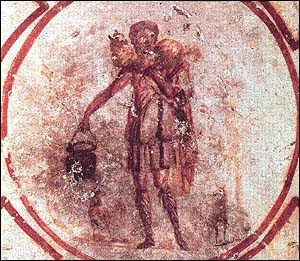 Catacombs of Saint Callixstus
Posted by Athos at 6:23 AM No comments:

This should say reams to anyone with any anthropological sensibilities. As Gil Bailie recently noted, that western society tries to reconstruct itself with twenty years of sexual experimentation while rejecting five-ten thousand years of collective wisdom about being human should tell you what and who is truly "developed".
Posted by Athos at 2:48 AM No comments:

Who You Going to Trust

Essential reading: Joseph Bottum's Anti-Catholicism, Again - The permanent scandal of the Vatican. He understands the significance of mimetic theory here, because years ago he wrote Girard among the Girardians (1996).
Given the anti-Catholics' presuppositions, their logic is correct. The same way that parents in the ancient world sacrificed their first born to insure having many progeny. The same way the guy next-door blows a trumpet at 6:00 a.m. to insure no elephants will stampede ("Why the heck do you blow that thing every morning?" "So the elephants won't stampede." "THERE ARE NO ELEPHANTS HERE!" "See?")
It's all about who are you going to trust for your epistemology, ontology, anthropology, and soteriology. Who are you going to trust for truth, goodness, and beauty.
Posted by Athos at 2:17 AM 3 comments: