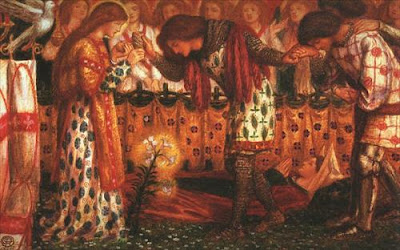 How Sir Galahad, Sir Bors, and Sir Percival were fed with the Sanc Grael; but Sir Percival's Sister died by the Way (1864) - Dante Gabriel Rossetti
Posted by Athos at 1:50 PM No comments:

All Sound, No Music

Anthony Esolen writes on some important cultural realities. Pay close attention to what he sees as indicatives and imperatives.

Recently my family and I watched The Sound of Music for perhaps the twelfth time - probably the last great musical that Hollywood ever produced. It made me wonder if I could list the reasons why such a movie could not now be made.


These reasons I offer below; but it seems to me that they can all be united under the single assertion that the intellectual, imaginative, and emotional palette of the American people has suffered a terrible constriction, a reduction to the tedium of lust and greed and the thirst for power. It is not so much that Hollywood would not make a movie like The Sound of Music as it is that the people themselves would be hard pressed to understand it...MORE>>

I Wun is beginning to realize a few things.

If you are the heir of a great civilization born of Christendom, you ignore the realities of human nature, like, say, the Doctrine of Original Sin, at your peril, Mr. President.

You really, truly are not a self-made man, sir. Everything you love the most you inherited not from progressive humanism. No. Follow the stream far enough and you will find yourself at Mother Church.
Posted by Athos at 10:35 AM No comments: 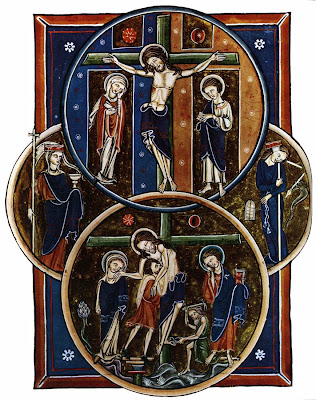 Psalter of Blanche of Castile c. 1235
Illumination on parchment, 280 x 200 mm
Bibliothèque de l'Arsenal, Paris
Posted by Athos at 5:16 AM No comments:

When the Prophet ­Muhammad died ­unexpectedly after a brief illness in ­Medina, in present-day Saudi Arabia, on June 8, 632, his followers were stunned. A contemporary called it "the greatest of calamities." Their grief was not only for the loss of an irreplaceable leader. ­Muhammad was "the seal of the prophets," the last in a line that stretched back to Adam. He had ­received revelations as "God's emissary" for some 20 years—revelations that he had communicated to the ­embattled community of his followers, first in Mecca and then, after the hijra, or emigration, in 622, in Medina—but now they came to an end. It was as though God, who revealed Himself through the Prophet, had suddenly fallen silent. 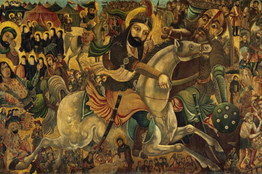 Brooklyn Museum/Corbis - ‘The Battle of Karbala,’ Abbas Al-Musavi’s depiction, circa 1900, of a seventh-century clash of Islamic factions.

In fact, the calamity was greater than Muhammad's mourners could have foreseen. Muhammad had not unambiguously named his successor. The question of succession would haunt Islam for centuries to come. The wrangling began within hours of Muhammad's death; it would quickly lead to a momentous rift between two implacable factions, Shia and Sunni. It is a divide that continues to this day, often with horrific consequences. In "After the Prophet," ­veteran Middle East journalist Lesley Hazleton tells with great flair this "epic story of the Shia-Sunni split in Islam," as she rightly calls it .. More>>

Civilization is not a gospel which has to be preached, it is an influence which pervades, a leaven which automatically overcomes.
- Monsignor Ronald Knox
Posted by Athos at 6:35 PM No comments:

Don't Look Down, Chivalrous One 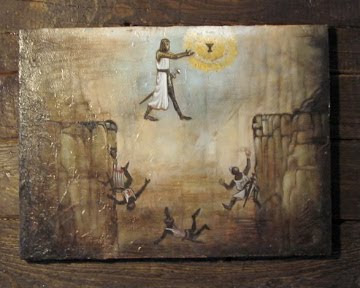 ORIGINALLY HANGING ABOVE the mantelpiece of Dr. Henry Jones, Sr., this artwork depicts the Christ-centeredness made available even to the modern-day knight errant. It is a sign of God's mercy that the Blessed Sacrament serves believers with the grace not only not to fall for luciferian wiles and counterfeits , but to imitate St. Peter’s faith caught as we are in the chasm of neo-paganism, threat of primitive violence, and naïf ideological hubris ... not to forget fighting dragons.

I am grateful for the fullness of the Catholic faith and the Eucharistic grace that Our Lord provides to keep Him firmly at the Center of our frail, human existence. In the words of an old, old gospel chorus:

Turn your eyes upon Jesus,
Look full in His wonderful face,
And the things of earth will grow strangely dim,
In the light of His glory and grace.
And, if you like rendition by Hillsong's Brooke Fraser, the lyrics of this are equally apt. Cheers
Posted by Athos at 3:09 PM No comments:

In our crazed times, it is refreshing to hear a surprisingly level-headed voice coming from academia and the world of psychiatry: Miriam Grossman:

I worked for twelve years as a psychiatrist for students at the UCLA campus here in California. During that time, thousands of kids came through my office. I was alarmed at how many of them had sexually transmitted infections and concerned about students, mostly young women, whose sexual lifestyle placed them at risk for disease, emotional distress and even infertility later in life. I was frustrated to see patient after patient in similar situations, yet my hands were tied. There wasn’t much I could do for them. These were young people who were otherwise well informed and proactive about their health. They were careful about what they ate, they exercised, avoided tobacco, and so on. But in this one area, in their sexual behaviour, they took alarming risks, and that was perplexing. I began to question these students carefully, and I examined how campus health and counselling centers approach sexual health issues. Those findings were discussed in my book Unprotected: A Campus Psychiatrist Reveals How Political Correctness in Her Profession Harms Every Student.

This new project was an extension of that. I went deeper into the field of sex education, looking at exactly what kids are taught, and at the history of sex education in the United States. I went online and explored the websites, books, pamphlets and videos created for kids and young adults. What I discovered was deeply disturbing...More>>

Austin Ruse at The Catholic Thing on the invaluable Maggie Gallagher.
Posted by Athos at 2:48 AM No comments:

Remember when "My Country 'Tis of Thee," "America," and, music critics' disdain notwithstanding, "God Bless the USA" were darned good signs of patriotism in elementary school?

So ... remind me: when did adulation of the president - any president - become the test of one's acceptance into the club vs. available victim fodder?

We used to praise our form of government, not fall for the ruse of personality cults. Shame on us. 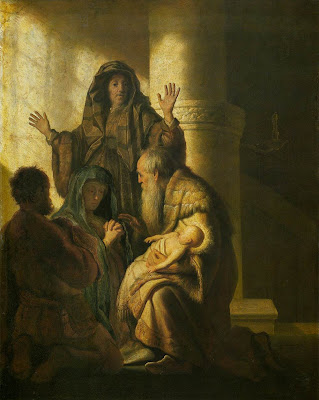 Simeon and Anna Recognize the Lord in Jesus (1627) - Rembrandt
Posted by Athos at 4:32 PM No comments: 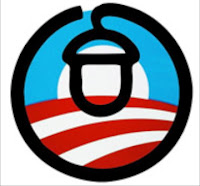 Mark Shea presents - Jon Stewart does the MSM regarding ACORN.
Posted by Athos at 3:52 PM No comments:

For those with ears to hear II

Pajamas TV examines the political, philosophical, and ideological analyses of Thomas Sowell as applied to today's revolutionary events. Bill Whittle comments. [ht: Anchoress]
Posted by Athos at 2:02 AM No comments:

The time has come to break the two party dance of mimetic rivals. It must be large enough to create true hope and true change, based not on the same old same old, but faithfulness to truth, goodness, and beauty.

In short, we must lock arms and become a people who love the Lord our God with all our heart, all our soul, all our mind, and strength; and our neighbor as ourself (Lk 10). It will be Catholic, in faith and morals, in loyalty to the magisterium, Pope's men (and women) all. It must be stalwart, resolute, and die hard; ready to oppose all who want to compromise the truth of Scripture and Tradition.

Our souls are at stake. I wouldn't mind its headquarters being at Ave Maria in Florida (though I would personally prefer Christendom College in Virginia). It must be large enough to make our absence - and our vote - felt by BOTH mimetic rival parties. But it must not - must not! - compromise on the Church's teaching office.

Our souls are at stake.
Posted by Athos at 3:22 PM No comments:

Jeff Miller, the Curt Jester, asks the pertinent question in the debate: Is Abortion Health Care, or Is it Not?

Why this is important is that the social engineers believe wholeheartedly that they truly have the power to define the terms of discourse, no one more so than his royal I Wun-ness.

I do not doubt their sincerity. I doubt their epistemology. Hubris comes in all shapes and sizes. None larger than when it rejects the sole source of lucidity - the Catholic Church's faith, reason, and magisterium - or worse, makes it merely one among many cacophonous voices.

This should be enough to illustrate the sacred origins, anthropologically speaking, of abortion. Once the first stone is thrown, mimesis of the worst kind may force open the sluice. Legitimate defense and chivalry is called for.
Posted by Athos at 2:21 PM No comments:

The greatest temptations I face are self-pity, despair, the panic that robs the good of intellect. Your grace saves me from them, O Lord. It is sufficient.

Today grace taught me right before my chemotherapy treatment that I loathe it because I, too, was raised in a culture that disdains the body in a kind of Gnostic angelism. Walker Percy astutely observed that those caught in this plight make occasional attempts at re-entry by means of bestialism. I thank you, Lord, that you excised that temptation at my Confirmation.

Chemotherapy is a blessed reminder that the body is, is good - imago dei, and that I am no gnostic. Let the chemo always remind me, O Lord.
Posted by Athos at 12:15 PM 1 comment: 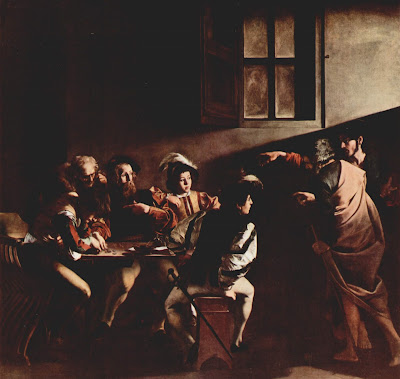 There Goes the Hotel

If you are Christian and live in the United Kingdom, beware of discussing - let alone defending - your faith with a member of the Scimitar. When it comes to who is believed, comforted, aided, and abetted in a court of law, you don’t have a chance.

CHRISTENDOM HAS BEFORE now taken up arms in its own defence; or even in a pathetic attempt to recover the Holy Places. Christian princes, before now have tried to spread the faith at the point of the sword, always, or nearly always, with disastrous results for religion. But the substantial victories of the Church have lain, always, in the sphere of the human conscience. Christ has reigned, not in the councils of nations, but in men's hearts.
- Monsignor Ronald Knox