7 Gifts of the Holy Spirit 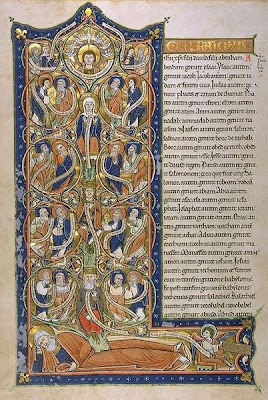 In this Tree of Jesse the seven gifts, represented as doves, encircle a bust of Christ. Capuchin Bible, c. 1180, BnF, Paris
As a sponsor going on a Confirmation retreat this morning with my confirmation, I needed to remind myself of the seven gifts of the Holy Spirit. Do you recall them?
Posted by Athos at 3:42 AM No comments:

Stop Apologizing for the Crusades!

Perhaps a better title would be something like Don’t Allow the Crusades to be Thoughtlessly Added to a Parade of Christian Horribles without Knowing More about It, but I wanted to get your attention.

Rodney Stark’s God’s Batallions is an outstanding book designed to help the educated reader (not only the academic reader) understand the Crusades. You know the routine. You want to talk about Christianity and the village atheist wonders just how you are getting past the horrors of the Crusades and the Inquisition. This book answers the question with regard to the Crusades. Stark brilliantly explains how the Crusades started, what happened in the course of events, and why they finally ended. All in all, the western church comes off pretty sympathetically. Readers who know Stark find it easy to trust him because he always questions excessive claims and makes sure to back his own assertions up with data..More>>

Today, Israel is like Saint Stephen, the first Christian martyr. That is to say, simply by being, Israel is both a scandal and a lightning rod for animosity. In short, Israel is a scapegoat, with Jews and Judaism as particular objects of persecution and, if possible, sacrifice. And the perpetrators do so with that particular false sense of self-righteousness that all scapegoaters experience.
In anthropological terms, regardless of what people ostensibly call themselves - "monotheists", "righteous", for example - if they resort to human sacrifice to maintain social and psychological cohesion, they are pagans. Pure and simple, pagans.
Posted by Athos at 2:57 AM No comments: 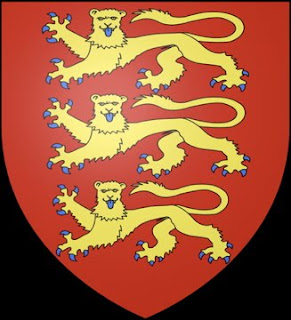 One wonders why this is happening. It's simple. Apparently I Wun disdains all things that come from the patrimony of the old Christian West.
Posted by Athos at 4:16 PM No comments:

Since the old Christian West seems to insist upon death from a thousand cuts of the Scimitar, General Moamer Kadhafi calls for another cut, now in Switzerland.
Posted by Athos at 3:23 PM No comments:

Due to anthropological considerations, this story is of considerable fascination. In the shoving match arena of public opinion, there are the quasi-intelligentsia (think the Inside Washington panel) who roll their eyes with wry grins at such "nonsense". They deride such effort coming from "birthers" right up there with the conspiracy theorists, or "truthers", who say the U. S. government brought down the twin towers on 9-11-01.
On the other side are those "birthers" who see in I Wun's candidacy an illegitimacy borne of the same snakes' nest as gave rise to all the evil "isms" that beset the poor old violent twentieth century.
All I am certain of, from a mimetic theory point of view, is that whenever human beings start saying things like, "It goes without saying..." or "Wouldn't it come out by now...?", there is nearly always mythologizing "mist" that stymies clarity of vision and truth. This goes both for the self-righteous moralizing Pentheus types, as well as the equally self-righteous hubris-filled progressivists who think they have got past all the mumbo-jumbo of things like Original Sin.
While I don't like the terrier-like ferocity of the "birthers", I admire the way they will not be dissuaded from trying to find truth in spite of derision, scorn, and mimetically induced "mystification".
Posted by Athos at 1:43 AM No comments:

The Big Bang and a Big Blowhard

Tom Jones at Headlinebistro.com writes on new discoveries about the creation of the universe:

Among the many discoveries of NASA’s twenty-year-old Hubble Space Telescope is the true age of the universe: 13.7 billion years. That’s when a titanic, incomprehensibly violent expansion – the Big Bang -- occurred, marking the start of the space, time, and physical laws which govern the cosmos as we see it in today. The Big Bang is the Genesis chapter in our scientific understanding of the physical reality in which we live, observe, and wonder.
Now scientists have come another step closer to understanding the creation conditions associated with the Big Bang. At the Brookhaven National Laboratory on New York’s Long Island, physicists have cranked up the 2.4-mile-diameter Relativistic Heavy Ion Collider to create temperatures of 7.2 trillion degrees, or 250,000 times hotter than our Sun’s interior. They did it by smashing gold atoms head-on at speeds approaching the speed of light, generating sub-atomic bubbles 40 times hotter than a supernova. Such temperatures have not been seen since the first microseconds following the Big Bang..More>>

And, relatedly, get a load of what John Barrow, 2006 winner of the $1.4 million Templeton Prize for Progress toward Research about Spiritual Realities, said to Richard Dawkins when Dawkins challenged him:

When Selfish Gene author Richard Dawkins challenged physicist John Barrow on his formulation of the constants of nature at last summer’s Templeton-Cambridge Journalism Fellowship lectures, Barrow laughed and said, “You have a problem with these ideas, Richard, because you’re not really a scientist. You’re a biologist.”
For Barrow, biology is little more than a branch of natural history. “Biologists have a limited, intuitive understanding of complexity. They’re stuck with an inherited conflict from the 19th century, and are only interested in outcomes, in what wins out over others,” he adds. “But outcomes tell you almost nothing about the laws that govern the universe.” For physicists it is the laws of nature themselves that capture and structure the universe—and put brakes on it as well.
The 2006 winner of the $1.4 million Templeton Prize for Progress toward Research about Spiritual Realities, Barrow follows a string of renowned physicist winners—including Charles Townes in 2005, John Polkinghorne in 2002, and Freeman Dyson in 2000..More>>

Because We Say So

Ever since Jeffrey Burke Satinover unveiled the politicization of the APA , I had a hunch this would happen sooner or later.
If the heresy of progressivism cannot become legal tender, it will become the psychological definer of the terms of discourse and "sanity".
Posted by Athos at 2:00 AM No comments:

Is It Legitimate Defense 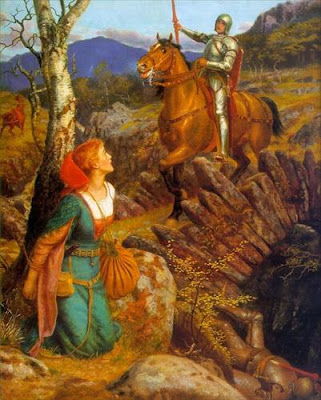 Overthrowing of the Rusty Knight (1908) - Arthur Hughes
A mental experiment: is stopping a fleeing purse-snatcher on a moped with a thrown bicycle an example of legitimate defense, or just target practice? Notice the nice wind-up before the pitch, by the way!
Posted by Athos at 4:08 PM No comments: 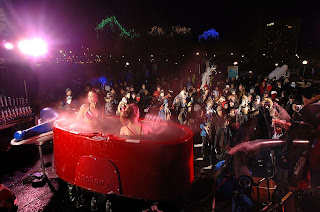 As Mark Steyn bitterly notes, this is seriously alarming: nanny states regulating (and enforcing) the speed of an annual pancake-flipping Shrove Tuesday "run" and hot-tub temperatures, as Iran is going militarily nuclear.
Terry Gilliam presaged it perfectly with a brief cameo appearance of Sting as a heroic young soldier appearing before a bureaucrat in The Adventures of Baron Munchausen (1988). It is reported that he, the soldier, single-handedly stormed the enemy's stronghold, disabled a cannon, and saved numerous lives. The bureaucrat promptly orders his execution for causing other soldiers to feel diminished and dispirited by comparison. (He might have said the soldier foisted his values on others with hate-crime, prejudice, and injustice.)
This is what occurs in the zany world of human sin and folly. The Magisterium of the Catholic Church predicts this gradient, as does the mimetic theory of René Girard. One should not be surprised by it at all.
Yet still we are; dumbfounded at finding such topsy-turvy "transvaluation of all values," Nietzsche's Umwertung aller Werte - as though "progress" is any hope and change from ancestral wisdom, as well as from truth, goodness, and beauty.
This is Girard's "negative imitation" with a vengeance.
If one is very fortunate - blessed, even - one will experience the grace to come home to the one true source of anthropological, epistemological, and soteriological certainty: the Catholic Church.
I can't promise the world won't cart itself off to hell in the proverbial handbasket. But the Barque of Peter is a safety and assurance in these absolutely bonker times.
Posted by Athos at 4:07 PM No comments:

Rote is Good ... Till the Nickel Drops

Although I see that Elizabeth Scalia has beat me to it, I planned earlier today to post on this.
I have heard a friend and mentor of mine speak about the perils of rote memorization, as in the Baltimore Catechism. Of course, I've also heard him tell of a young monk who had doubts and his novice master told him to keep repeating the Creed till it became part of him.
Father "Z" makes a point with which I am in full agreement. The bogeyman of "memorization" in modern educational theory needs to be exorcized.

Once upon a time I was called in to a hospital where a man in in his last
minutes. He had a hard death. The old man’s daughter, fallen away,
was very bitter, very angry and she unloaded on God by unloading on me.

I tried to impress on her that he had lived a good life in an earthly way and now
his life would continue, but in another and better way.

She was having nothing of it. She was focused on the bad experience as he was dying.

She eventually fumed "Why did your God do this to him? Make any of us at all if this is what happens?"

I responded: "Why did God make you?"

She paused. The light bulb went on."God made me to know Him, to love Him, and to serve Him in this world, and to be happy with Him for ever in heaven.

"Someone had taken the time to drill that into her, and it was still there.

What had been buried for decades, memorized as a child long before she could "understand" what it meant, was there and ready for her in the moment she needed it.

Yes, I am in favor of children memorizing things..More>>

As a former Prot pastor, I have stood at the hospital bed-side of a near-comatose woman. A nurse looked at me smugly and said, "She can't hear you." I began the Our Father, and the outwardly senseless woman chimed right in and prayed along with me. The nurse picked her jaw up out of a bed pan and left the room.
Memorization of the great words of the Faith from Mother Church are gems of great price we can help give our spiritual children, "understood" or not. They will become even more valuable the older they get.
Posted by Athos at 7:26 AM No comments:

Labels: The Brew That is True, Truth Goodness n Beauty

Where will the Herons fly

I love the way the Israelis say, "Okay, take a good look. Here is my hand. Now, which card do you think I will be playing next?"
Posted by Athos at 3:47 PM No comments:

And now, for something completely different this Sunday evening. Wet your whistle on some vintage Buster Keaton (then go out and get The General (1926) to watch).
Posted by Athos at 3:34 PM No comments:

Terrorists are where you find them