Jos. Bottum - Signpost at the Crossroads

You head down the road of public life in America, and you run up against religion. From the conversations in the barber shops and the coffee klatches, through the aldermen’s offices and the town halls, the school boards and the zoning commissions, the campaigns and the columnists, and eventually to the state houses and even, perhaps, to that white-domed Capitol building, far off in Washington—somewhere along the line you come to the crossroads where religion cuts across your path.

You travel the long road of religion in America, and you find the Bible chapels, scattered along the prairie like tumbleweeds that have somehow grown white vinyl siding. You drive past the green-lawn suburban churches with cutesy messages on the brick-framed signs placed out near the street. You pass the exhaust-stained marble fronts of the old city congregations, the yellow taxis inching angrily by. You visit the grand cathedrals and synagogues, announcing their people’s success in America, this newfoundland, and you see the pulpits and the choir lofts and the pews and the Sunday schools—the church basement halls, with their dented aluminum coffeemakers and styrofoam cups, their book tables, their after-service conversations burbling away. And somewhere down that highway you come, again, to the crossroads where the public life of the nation confronts you.

There is a marker at that place, naming its many promises and dangers for travelers, with the word abortion at the top. Even now, abortion remains what it has been for more than thirty years: the signpost at the intersection of religion and American public life.

Of course, there are those who think this shouldn’t be so. Personally, I cannot see how abortion could not rank first. We eliminate 1.3 million unborn children in this country every year, a number that dwarfs, by far, the impact of every other activity with which the moral teachings of the churches might be concerned. For that matter, the story of abortion is a tale of blood and sex and power and law—I do not know what more anyone could need for public significance. The people who say they are uninterested in the issue of abortion have always seemed, to me, to be trying to suppress the imagination that most makes us human.

Nonetheless, even in the churches some do not see things this way, and they want the whole issue simply to go away. But the fact that they wish abortion didn’t matter shows that abortion does, in fact, matter. It’s proof that the social observation remains true, for good or for ill. Whether one approves or not, the issue of abortion is here in America—the signpost at the crossroads.
Read all of The Signpost at the Crossroads here.
Posted by Athos at 12:11 AM No comments: 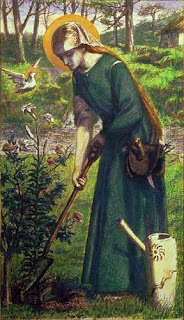 The Pilgrim Queen (A Song.)
THERE sat a Lady
all on the ground,
Rays of the morning
circled her round,
Save thee, and hail to thee,
Gracious and Fair,
In the chill twilight
what wouldst thou there?
"Here I sit desolate,"
sweetly said she,
"Though I'm a queen,
and my name is Marie:
Robbers have rifled
my garden and store,
Foes they have stolen
my heir from my bower.
"They said they could keep Him
far better than I,
In a palace all His,
planted deep and raised high.
'Twas a palace of ice,
hard and cold as were they,
And when summer came,
it all melted away.
"Next would they barter Him,
Him the Supreme,
For the spice of the desert,
and gold of the stream;
And me they bid wander
in weeds and alone,
In this green merry land
which once was my own."
I look'd on that Lady,
and out from her eyes
Came the deep glowing blue
of Italy's skies;
And she raised up her head
and she smiled, as a Queen
On the day of her crowning,
so bland and serene.
"A moment," she said,
"and the dead shall revive;
The giants are failing,
the Saints are alive;
I am coming to rescue
my home and my reign,
And Peter and Philip
are close in my train."
The Oratory.
1849.
Posted by Athos at 10:28 AM No comments: 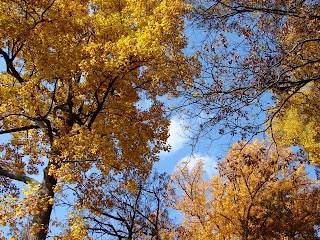 THE ONE-TIME LEADER in British Communism, Douglas Hyde, astonished his twentieth century colleagues by seeing his name across national newspapers as having resigned his job as news editor of the Daily Worker and the Communist Party. He was becoming a Catholic.
Shortly before, he and his wife "outed" to one another and discovered that the Holy Spirit had been leading them in parallel direction. Joseph Pearce relates the events in his nonpareil must-read/own book, Literary Converts:
Hyde: "Are you becoming a Catholic or something?"
"I wish I were," she replied.
Hyde's heart leapt: "And I wish to God I could do the same."
For the first time in months they came clean with each other. Hyde told her exactly how far he had travelled. How he believed that the culture of the Middle Ages had not died with feudalism but was still alive in the modern world, 'a living Catholic culture' (243ff).
+ + +
If you are tired to death of the sham party politics of America, the present 'pharoah' who knows not Joseph (or Biblical faith and values from his progressivist place of power, only from afar); if you are like Douglas Hyde (though not so officially), exhausted by the mere human projects that keep ending, like those of the dark twentieth/twenty-first centuries, in Gulags, gas chambers, killing fields, Caliph-justified vitriolic violence, and Gulf water disasters ...
"The culture of the Middle Ages (has) not died, but (is) still alive in the modern world, a living Catholic culture."
The July/August issue of The Saint Austin Review (StAR), July/August is entitled, The Middle Ages. I recommend strongly that you pick up a copy, or, better yet, subscribe to this journal that clear-sightedly views global events and culture from a stance faithful to the Magisterium of the Church.
What you yearn for and want most deeply may - just may - still be quite alive and flourishing in a world that you see, quite rightly, that has gone mad. "Well, that's your opinion," you say? I paraphrase Evelyn Waugh:
... the Church is not, except by accident, a little club with its own specialised vocabulary, but the normal state of man from which men disastrously exiled themselves.
Posted by Athos at 2:26 AM No comments: 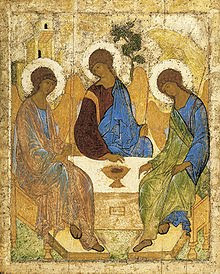 Trinity (1408-25) - Andrei Rublev
First of all, let me apologize for the truncated manner of my posting. Sitting in an upright position less than two weeks out from my surgery leaves me at a disadvantage, so please forgive errors, etc.
An important hint I want to leave for those in search of breadcrumbs leading to cultural hope and the renewal of Christendom can, it seems to me, be found in this modern prophecy.
Conspiracy theories revolve around this document at quite a speed. It is vital, therefore, to slow down and realize a few things about this Fatima revelation. First, while there is an element that rightly sees "chastisement", in light of more recent events - namely, the cultural meltdown of the West rightly called suicide by the observant - there is a much more crucial element, one of theological hope.
Remnants of chivalry, of faithful sons and daughters of Our Lord's Catholic Church, of willingness not to buckle and give-in exist in old Europe, in new America, and elsewhere around the world.
Sadly, however, it is a well-documented reality that the West is emasculated, profligate, shamelessly promiscuous, literally de-generate, and no more forward-thinking than the next sensualist experience. It does not have the faith, morals, or virtuous wherewithal any longer to stand before the enemies of Christendom.
Not so, it seems, in Russia. Now"consecrated" to Our Lady as Fatima urged, Russia is just as sinful. Of course. As secularized? Perhaps ... but it seems not so. Russia has dealt as an entity with mightily violent foes for many long centuries - from the Tatars without to the Stalinists within. The West, except for the twentieth century's two huge bloodbaths, has become a mere batch of weathervanes, whiney sensualist splinters, avoiding mortal consciousness and distracting itself to death.
So, look with hope to the Holy Father. Be a Pope's man - or woman. Trust Catholic truth. Be strong in eucharistic grace, and all the other sacraments. And pray - pray - for our Orthodox brothers and sisters in Russia. They have NOT forgotten how to stand before the enemies of Christ our King and His holy Church.
We may learn and follow under the consecrated leadership of Our Lady, the Blessed Virgin Mary, the Queen of Heaven.
Posted by Athos at 1:56 PM 1 comment:

In my abbreviated way of return to blogging, here are quotes from a real hero of mine, Monsignor Ronald Knox. As I glanced at the WaPo headlines this morning, the following could not be more apropos:
They have substituted for the infallibility of the Church a doctrine of the infallibility of perishable human intellects ... The newspaper proprietor, while he aspires to be the tyrant of public opinion, must in many ways stoop to be its slave.
Then, too, and perhaps more related to my - and your - life:
In proportion as we are good Christians, the world will find us ... a little removed from its insensate pursuit of pleasures, a little obsessed with thoughts of death and of judgment, a little skeptical about its facile optimisms ... in proportion as we are good Christians, this seriousness of character will not reflect itself in empty brooding on the wickedness of the world, will not make us morbid, self-centered, disillusioned. Rather, we shall find that Christian sorrow and Christian joy have their roots nearer together than we fancied; that the desire for God's will to be done perfectly in us and in all creatures, which is the Christian religion, bears a double fruit of sadness and of gladness. For so it must be, until our earthly Lent is over, and we rejoice for ever in the triumph of the eternal Easter-tide.
- Ronald Knox
Posted by Athos at 10:18 AM No comments: