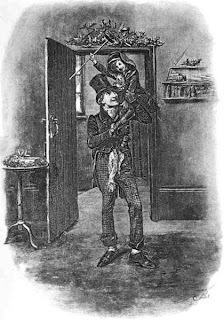 Rich Lowry gives a moving account of how Charles Dickens' A Christmas Carol revitalized "Merry Christmas!" in merrie olde England after Cromwell and the Puritan Parliament eschewed all Yuletide blessings of the Old Faith. Ostensibly Dickens was anti-Catholic; but, as Chesterton unfolds the mystery in his biography, surreptitiously, like many remnants who love truth, beauty, and goodness in England even today, he was cut from the cloth of the Old Faith himself.

When the story of A Christmas Carol came to Charles Dickens, “he wept over it, laughed, and then wept again,” writes Les Standiford, author of the winsome new book The Man Who Invented Christmas . With “a strange mastery it seized him,” a friend said of the yarn. Dickens wrote the book in six weeks in 1843 and believed in it so deeply that he undertook all the financial risk himself of publishing it.

And so Tiny Tim, Scrooge, and “Bah! Humbug!” became an irreducible part of our Christmas. Dickens didn’t “invent” the holiday, as Standiford’s overreaching title says, but he revitalized it as the family-centric occasion for fellowship and generosity that we know today.

Read all of Rich Lowry's A Dickensian Christmas - How Scrooge Saved Christmas.

UPDATE: Read here from the Boston Globe Michael Kenney's Dickens's enduring gift to Christmases future.
Posted by Athos at 4:45 AM