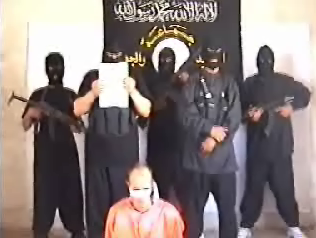 In my opinion, the people of the West who justify the collective myths, rituals, and prohibitions of the Scimitar fall into two -- okay, three categories: (a) those who simply want Judaism and the Christian faith to "take a hit" by any and all possible means; and (b) those who don't give a fig for religious truth claims, but maintain the multicultural high ground stance of a "level playing field for all." The former are usually undeclared neo-pagans captured by the primitive Sacred and in need of a victim; namely, Jews and the Church. The latter folk (b) are those still high on the fumes of the 60's -- that is, also neo-pagans who haven't a clue as to what is happening. I will speak to a third group (c) who want truth about Islam squelched below.
The Scimitar itself is a rather conventional expression of the primitive Sacred. However, it is the religion of many oil-rich countries, our dhimmi lords. Many Catholics and many of other Christian bodies in the tattered and ragged West (so infused with the recrudescence of the pagan with its abortion mills of Moloch churning away) are beginning to realize the threat of Islam, but can only thematize it in ways the Mainstream Media, being members of (a) and (b) above, find intolerable so reject what they have to say outright.

Fortunately, the Spirit of the biblical faiths is not without witness. For example, Ironic Surrealism II asks:

What if everyone, each and every human being in the world who was offended at one thing or the other, reacted as violently as Muslims do upon being offended? There would be daily chaos on a global scale 24/7.

Atlas Shrugs rejoices that Geert Wilder's FITNA is up and running.

The third group are (c) those who justify the actions of ritual violence by the Scimitar out of blinding fear. Their misplaced hope is that by placating the dread-inducing practitioners of Islam, these ad-hoc priests of the Sacred will "live and let live." This group has not read enough either, again, hoping that bliss is found in their ignorance. These ostriches hide their heads in the sands of the good wishes of their Islamic overlords.

The only, I repeat, the ONLY solution is speaking the truth, living with chivalry and fortitude, and knowing "the Way, the Truth, and the Life" [Jn 14,06] - Jesus Christ the Lord in and through his Catholic Church and her sacraments of grace. Go -- GO -- to Mass; read the Catechism of the Catholic Church and anything by Girard; keep your wits about you and your dogs loose. Assume nothing, and pay attention to Doc’s Scimitar Fact(oids) in relation to your country and its Islamic demographics.
Posted by Athos at 3:02 PM