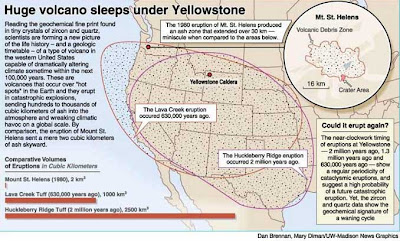 U. S. News & World Report tells more about the seismic activity at Yellowstone National Park. In the article, it relates that Bill Bryson interviewed Yellowstone geologist Paul Doss about the supervolcano's last eruption for the book, A Short History of Nearly Everything:

(Bryson) asked him what caused Yellowstone to blow when it did.

"Don't know. Nobody knows. Volcanoes are strange things. We really don't understand them at all. Vesuvius, in Italy, was active for three hundred years until an eruption in 1944 and then it just stopped. It's been silent ever since. Some volcanologists think that it is recharging in a big way, which is a little worrying because two million people live on or around it. But nobody knows."

"And how much warning would you get if Yellowstone was going to go?"
He shrugged. "Nobody was around the last time it blew, so nobody knows what the warning signs are. Probably you would have swarms of earthquakes and some surface uplift and possibly some changes in the patterns of behavior of the geysers and steam vents, but nobody really knows."

"So it could just blow without warning?"

He nodded thoughtfully. The trouble, he explained, is that nearly all the things that would constitute warning signs already exist in some measure at Yellowstone. "Earthquakes are generally a precursor of volcanic eruptions, but the park already has lots of earthquakes-1,260 of them last year. Most of them are too small to be felt, but they are earthquakes nonetheless."

Read the article here.
Posted by Athos at 3:51 PM