Hoisting A Steyn & the Crucified One 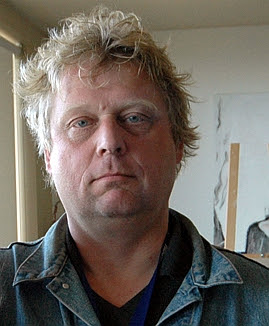 Mark Steyn sees something he doesn't quite know how to thematize in ”Silence of the Artistic Lambs.” As with others left scratching their heads over the selectivity of finger-pointing on the Left (while the attitude of the Left toward Right wing accusers is, "What do you expect?"), Steyn hasn't read his Girard. Yet he ably traces the deadly outline of structural violence in Islamist fascism with great wit and acumen.

The fracturing of the Right as seen in the mutual casting out of Little Green Footballs, on the one hand, and Gates of Vienna/Fjordman, et al, on the other, shows the sad ignorance of mimetic theory in the struggle against the two-front war facing the West. It also shows the utter necessity to find one's ontology and epistemology -- not to mention anthropology -- in the revealed deposit of faith vouchsafed by the Magisterium of the Catholic Church when dealing in matters of defense of the West.

Be that as it may, Mark Steyn sees what Europe can and will become, without a return to the Church. Relating the tale of the murder of Theo Van Gogh, Steyn quotes from the opening chapter of Daniel Silwa's The Secret Servant:

Professor Solomon Rosner, a Dutch Jew and author of a study on "the Islamic conquest of the West," is making his way down the Staalstraat in Amsterdam, dawdling in the window of his favourite pastry shop, when he feels a tug at his sleeve:

"He saw the gun only in the abstract. In the narrow street the shots reverberated like cannon fire. He collapsed onto the cobblestones and watched helplessly as his killer drew a long knife from the inside of his coveralls. The slaughter was ritual, just as the imams had decreed it should be. No one intervened — hardly surprising, thought Rosner, for intervention would have been intolerant — and no one thought to comfort him as he lay dying. Only the bells spoke to him."

They ring from the tower of the Zuiderkirk church, long since converted into a government housing office:

"A church without faithful," they seemed to be saying, "in a city without God."

Exactly. Even so, Theo Van Gogh, like all victims of the violence of the primitive Sacred, was and is at-one with the "lamb that was slain" since the foundation of the world [Rev 13, 8] in Catholic teaching; Christ, as Mother Teresa was wont to say, "in all of his distressing disguises" [Mtt 25,31-46]. Christ in our world still as the outcast, the slain, the expelled, the scapegoat.

The more they try to cast Him out, the more the Crucified One enters our world.
Posted by Athos at 2:38 AM